I’ve just walked out of a record shop in Mont Albert clutching the 2018 re-issue of Pink Floyd’s Pulse. Four vinyl records and a 12” x 12” hardcover book in a handsome slipcase. No flashing light on the spine but it still cost a bomb.

Sitting on the shelves at home is the original double CD set, quietly blinking away. Why on earth would I want a second, much more expensive edition of a live album that is really just a lavish ‘beat the bootleggers’ release?

It’s odd to reflect that if you exclude the half-live, half-studio Ummagumma, Pink Floyd’s first official live album was 1988’s Delicate Sound of Thunder. In other words, the entire Roger Waters era passed without a band-endorsed concert release.

One of my favourite ‘boots’

Pink Floyd visited Australia in the seventies, but I didn’t see them. It was the Dark Side tour, and I believe it was excellent, with the plane crashing into the backdrop and all that.

When it was announced that the band was playing the Rod Laver Arena in 1988 as part of the Momentary Lapse of Reason tour, I did not hesitate. I even borrowed a fancy sound recorder and taped the concert. Unfortunately I employed a noise reduction system unique to that particular recording device, with the result that the recording was unlistenable. Still, I kept those cassettes for years. And I’ve still got the t-shirt. 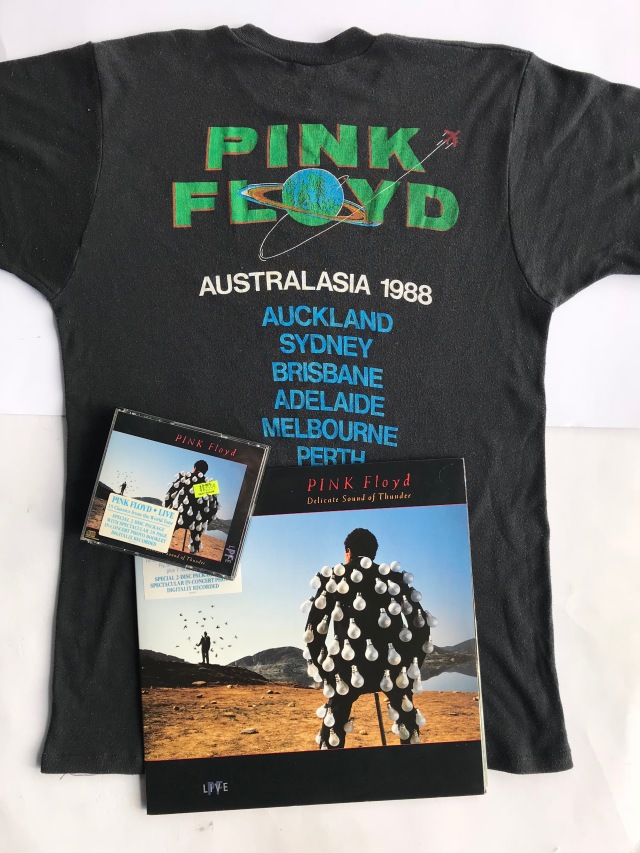 We’re going on a day trip, she said.

What should I wear?

Cover all bases, she said.

This enigmatic exchange took place in the living room of Bridget’s friends in Wilhelmshaven on the northern coastline of Germany, one mid-August Saturday, 1994.

I cast a bemused glance towards our hosts.

You can borrow a towel, said Thomas.

So we jumped into the Fiat Panda and off we went. When I say jumped, I really mean ‘folded myself into’; the Panda is not a spacious vehicle. Nor a speedy one.

Beetling along a B-road south of Bremen, I was still none the wiser about our destination. Other than it being unlikely to involve the beach. We were travelling inland at speeds sometimes approaching a dizzying 100 kph. The country was about as breathtaking as the velocity, but it was pleasant to gaze out across rural  Germany…

A couple of hours into the drive I noticed a re-occurring poster—on lampposts, the sides of buildings—alerting the good burghers of Lower Saxony to the imminent performance of Pink Floyd in Hanover. Imminent? It was tonight.

I think I know where we are heading, I said.

Bridget grinned broadly. So did I.

The journey took us approximately 3 ½ hours in the Fiat

The Niedersachsenstadion was packed. Well, it would be in a couple of hours.

When we first arrived, there was a band of humanity 60m deep arced across the football pitch in front of the stage but plenty of visible turf if you wanted to kick a ball about. Having only a beach towel, we instead staked out a bit of grass just behind the lines and settled down to wait.

It being nigh on twenty-four years since that August evening, I confess that my memories of the concert comprise glimpses, disconnected snapshots and smudges. I recall being utterly thrilled when the band opened with ‘Astronomy Domine’, the first track on the very first Pink Floyd album.

Swishing ‘round my head is some kind of cranio-auditory trace of the sound leaping across the stadium from speakers mounted high on the far side of the stands, especially during the Dark Side numbers. And my nostrils still quiver at the waves of herbal smoke drifting this way and that as fellow space cadets swayed to the melancholy beauty of ‘Shine on you crazy diamond’.

I remember wishing there had been more surprises in the set; something from Animals, a condensed version of ‘Echoes’… but overall, it was a blast. In fact, the only downer was getting the Panda out of the gridlocked car park at the end. That took over an hour, but I stayed chilled; laying back cradling my souvenir t-shirt and reliving the concert. A contact high.

Revisiting concerts is easy when you have a recording of the event. Not necessarily the gig you attended but a facsimile compiled from performances across the tour. That’s how it usually works.

Researching the setlist for this piece, I was chuffed to find that the rendition of ‘Keep talking’ from Hanover was chosen for the Pulse live album. Hearing the surge of cheering at the end I think, ‘I’m in that mix somewhere’.

A couple of months back I stumbled across a blog post where the writer was offering advice on disembowelling the Pulse CD box to allow replacement of the batteries. Apparently some 1995 versions had the light-and-battery pack glued inside, meaning that considerable damage had to be inflicted upon the package to get the beacon pulsing again. Not so my copy, and when I’d replaced the AAs and provided (the slightly crestfallen) blogger with photographic evidence of the ease with which this was executed, I listened to the set.

Well-played, I thought. Very professional. Slick, even. And I filed it again.

So why, in the name of all that’s floydy, did I tuck those eight sides of vinyl under my wing with such pleasure. I have a dozen live recordings, LP and CD, that are far more exciting and entertaining for all their dubious sound quality and dodgy provenance.

I guess it’s because I was there, one mild summer night nearly a quarter of a century ago, on a football pitch in Hanover, with a woman both thoughtful and generous, as the last gleams of sunset tinted the metal stadium roof, amongst forty thousand swaying Germans, in a cauldron misted with marijuana, while the grass turned damp, listening to a band whose comfortable waistlines belied the potency of their musical legacy, dreaming a present past future, and for a moment not feeling like a lost soul swimming in a fishbowl.