HAVE YOU EVER BEEN TO ELECTRIC LADYLAND?

The third and final Jimi Hendrix Experience album, the double Electric Ladyland, was released in October 1968.

For me it is the greatest of his studio career. It would also be the last studio release in his lifetime, and see the breakup of the Experience. More: the album marked the departure of bassist Noel Redding and producer/personal manager/friend, ex-Animals bassist Chas Chandler, who had originally brought Jimi to England and steered his early career in the UK and Europe.

By 1968 Jimi was a world-wide rock star and had well and truly cracked the US market. He was able to command enormous fees for concerts; the days of Chas’s austere recording sessions in London were long gone. Now Jimi was ensconced in New York, a city which, as we all know, never sleeps. It was from endless late night and early morning sessions at The Record Plant in NYC that the source material for Electric Ladyland was committed to countless reels of tape. 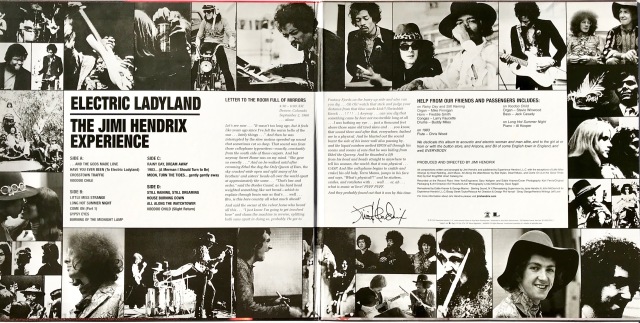 But the long, drawn out nature of these sessions, with more often than not a host of hangers-on, was too much for Chas and Noel. So Jimi ended up producing the music himself, assisted by supportive engineer Eddie Kramer. Together they were able to explore, experiment and broaden the palate of what was possible in rock. This is an important part of the enduring success of the album.

While living in New York, Jimi was almost continuously jamming in clubs with an endless stream of musos who were  passing through town. As a result, we see among the guests on the album members of Traffic, Jack Casady (bassist with the Jefferson Airplane), organist Mike Finnigan (who is currently working with Bonnie Raitt) and drummer Buddy Miles, who would eventually be a member of Jimi’s short-lived Band Of Gypsys.

The peak of Jimi’s studio jamming is the magnificent fifteen minutes of “Voodoo Chile”, with Casady on bass and Steve Winwood (who Jimi greatly admired) on organ. Noticeably, Hendrix uses no effects, as if wanting to avoid overwhelming the rest of the band, but has a wonderfully clear bell-like tone and just deploys single string runs throughout. Another successful jam—“Rainy Day, Dream Away / Still Raining Still Dreaming”—is a jazzy shuffle with Mike Finnigan and Buddy Miles.

“Voodoo Child (Slight Return)” seems essentially live, and is a real tour-de-force as Jimi changes gears on each instrumental break, getting further and further out there. As they used to say, turn it up loud!

Also on the album were attempts at a hit single, “Crosstown Traffic” (not successful) and Dylan’s “All Along The Watchtower” (ultimately successful and the best known song from the album). “Burning Of The Midnight Lamp” was a reasonably successful single the previous year in the UK.

As with all of the Experience albums, there are some below par tracks but let’s not dally with them. Instead, it’s worth highlighting the experimentation that Jimi now had the studio time and freedom to explore.

The album begins with a short soundscape, “…And The Gods Made Love” which leads into the title track, a beautifully lyrical song that is, in its own way, experimental. But for this long-time fan, the LP reaches a peak on side three with “1983…(A Merman I Should Turn To be)” where Jimi and girlfriend escape what appears to be World War III and decide to live in the sea (hence the title). It contains a beautiful, poignant riff and plenty of different experimental instrumental sections stretched over thirteen minutes. It really is a crowning achievement.

Things would never be the same for Jimi because, with the Experience dissolved, he was forced to find a new direction. One could argue it is something he never comfortably found. And perhaps that is why Electric Ladyland is such and important album, not just for its musical achievements but as a significant marker in Jimi’s short-lived career.

Hendrix fanatics (like your correspondent) will have noted that a three-disc Blu-ray set has been released to mark the 50th anniversary of Electric Ladyland. Although I haven’t acquired it, I’m sure this fan will be sending yet more money in the direction of Experience Hendrix Corporate-land. Wonder what Jimi would make of that.

This article (as with the previous Jimi Hendrix Experience posts, here and here) was penned by Vinyl Connection’s highly-valued Hendrix expert, Steven Newstead.

← ALL THINGS MUST PASS
INSIDE →