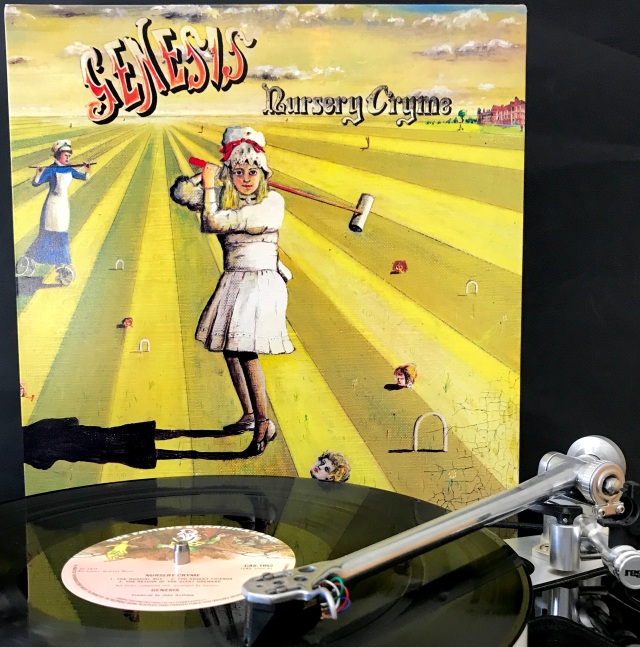 After their initial 60s album and the exploratory but not-quite-there-yet “Trespass”, Genesis started to define and grow into their own sound with this third LP. The eccentric Englishness (particularly in Peter Gabriel’s theatrics) sparkles, while the ambition of the compositions makes for music twists and turns that would be further refined on their next outing. Highlights: “The Musical Box”; “Return of the Giant Hogweed”. [Released November 1971]

Slight yet catchy tunes, unselfconscious silliness, good-time rock and roll and ushering in glam while Bowie was still warming up to the idea… Marc Bolan’s T Rex nailed the emerging scene with gleeful irreverence. There’s something almost punk about Bolan’s utter disregard of meaning in his lyrics. He doesn’t give a damn about substance, he just wants us to have a good time. And we do, with the immortal trash of “Bang a Gong (Get it On)” leading the boogie children onwards towards satin flares and perms. The following year the cheeky elf was driving a Rolls Royce because it’s good for his voice. Highlights: “Cosmic Dancer”; “Jeepster”. [Released September 1971]

A very solid album by the ‘orrible ‘oo. ‘Very solid’ seems like damning with faint praise, doesn’t it? So why is Who’s Next so high in the Top 71 list? Because of a trio of Pete Townshend songs that are powerful and memorable. Highlights: “Baba O’Riley”; “Behind Blue Eyes”; “Won’t Get Fooled Again”. [Released August 1971]

This is the album where Yes really hit their stride and, like Genesis, it is their third. With Steve Howe bringing his unique guitar stylings over an energised rhythm section of Chris Squire and Bill Bruford, the band wrote all the material and headed for the stars. Highlights: “Starship Trooper”; “Your Move / All Good People”. [Released February 1971]

Sometimes romantic, always lyrical, often injected with a shot of Caledonian soul, Van Morrison’s 1971 album is wonderfully crafted and infused with life. A confident record by an artist at the peak of his powers that has stood the test of time. Highlights: “You’re my Woman”; “Moonshine Whiskey”. [Released October 1971]

Which leads us into the Top Twenty…