In Vinyl Connection’s 2015 end-of-year report the category of “Most Ridiculous Purchase” was won by the 3 LP set allegedly documenting the 1971 rock festival, Glastonbury Fayre.

The following points were offered as explanation. 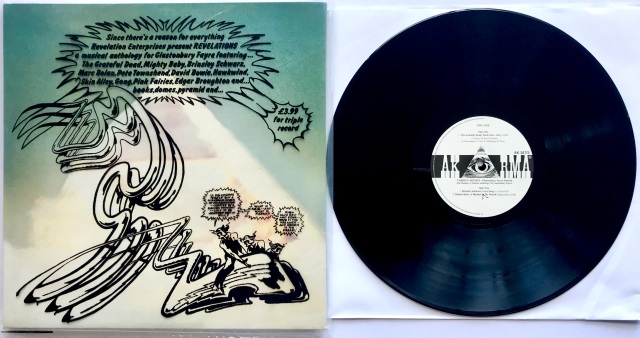 I have been reminded of this monster, twice. The first was its appearance in the VC spreadsheet as a 1972 release (April 1972, to be precise) and thus a candidate for the 72 FROM ’72 series. The second was an article on the film of the event (released May 1972), posted by Ric Ouellette at Reel And Rock. 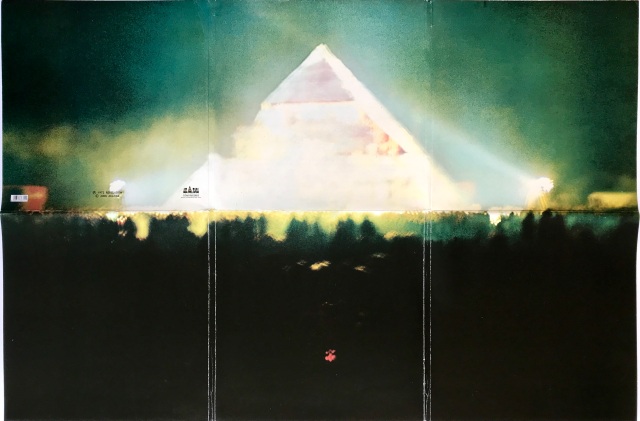 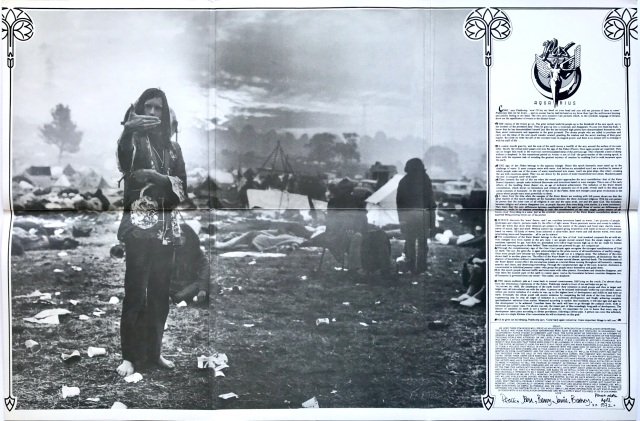 From its six-panel fold out poster sleeve (like Hawkwind’s Space Ritual, right?) to the stoned booklet with the obligatory full-frontal nude reveller smoking a hash pipe, this Barney Bubbles designed package is extraordinary. As, indeed, was the extensive list of acts who performed. Committed to vinyl were the Grateful Dead (though not from Glastonbury), the interesting and largely forgotten Mighty Baby, Hawkwind (though not from Glastonbury), The Pink Fairies and the Edgar Boughton Band doing their interminable crowd favourite “Out Demons, Out”.  Artists who performed but don’t appear on the album included Traffic, Family, Henry Cow, Arthur Brown, Terry Reid, and David Bowie (though he does appear with the studio track, “Supermen”).

No particular surprise, then, that the final dot point in 2015 was this:

Here are some more photos. 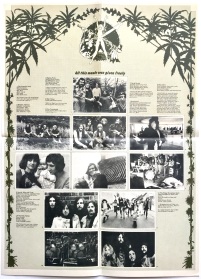 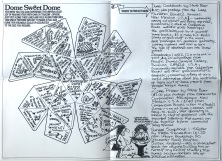 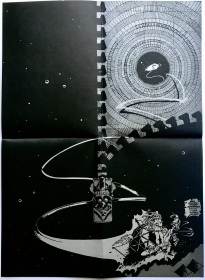 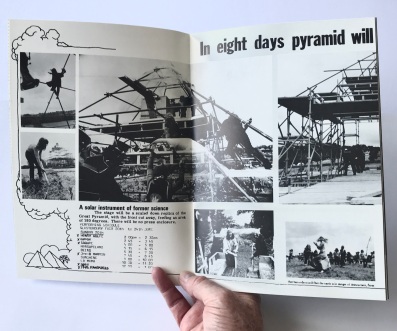 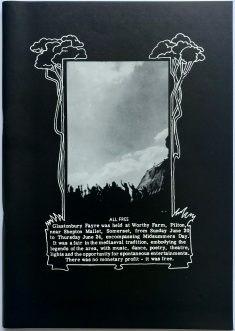 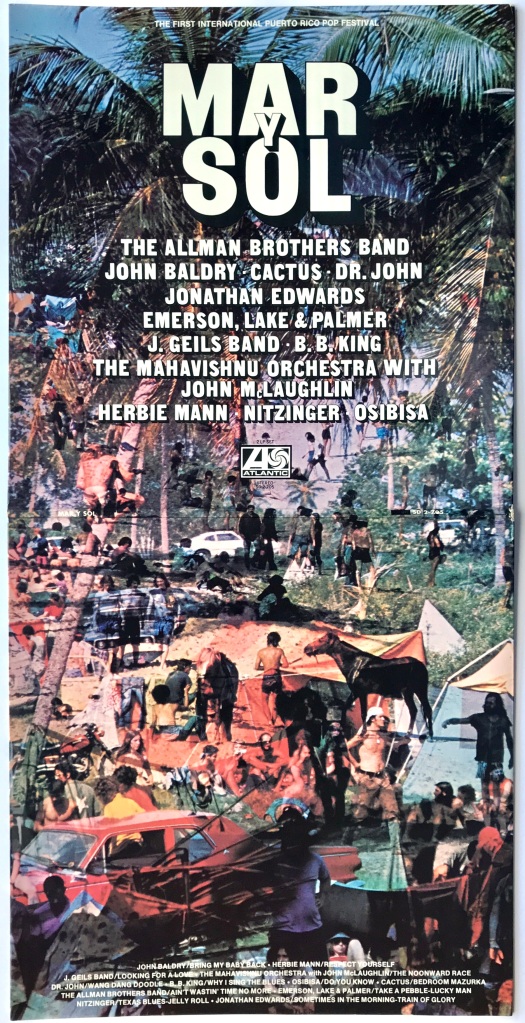 The first, and indeed, only International Puerto Rico Pop Festival took place over the first three days of April, 1972. If you made your own travel and accommodation arrangements tickets were $15, while complete packages started at US$149. The lineup was varied and genuinely international, with Emerson Lake and Palmer and Osibisa featuring and musical contrast being provided by Dave Brubeck and Herbie Mann.

Sadly, the event was not considered a success. Black Sabbath sat in their nearby hotel awaiting a helicopter transfer to the site that never came. The government was less than fully supportive while the poverty stricken locals saw little advantage in hosting a bunch of privileged hippies. There were several deaths at the beach (causes unknown), while the organiser avoiding arrest by scarpering before the festival finished.

Yet there were highlights. The Allman Brothers track on the album is great, as is ELP’s performance. Reports relate how a then unknown Billy Joel impressed the crowd while Osibisa brought some grooving joy to proceedings. Like all festival albums, the Mar Y Sol set is a mixed bag, but the sound is quite reasonable and it’s great to hear BB King and the Mahavishnu Orchestra on the same record.

The Sunbury Rock Festival, set on a dusty farm some 40km from Melbourne, has legendary status in Australian music lore. This is as much to do with it being the best documented (records, film) as with the quality of either the event or the music. Still, when the first Sunbury took place in January 1972, it was a big deal with some 35,000 fans paying AU$6 for the three day event. 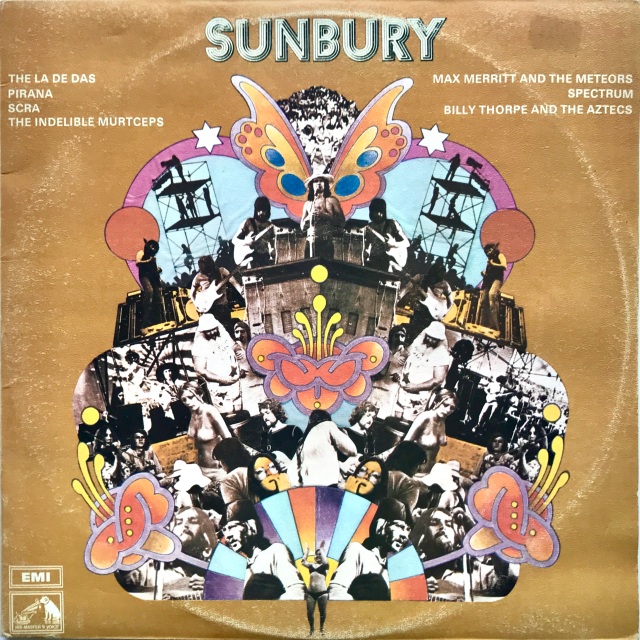 The all-Australian line-up featured many of the popular bands of the day, ranging from the bounce of The Bushwhackers and Bullockies Bush Band through to the Mahavishnu inspired explorations of Mackenzie Theory. But the dominant sound was that of chugging blues rock, a sound that was fast becoming ubiquitous in pubs around the country. Spearheaded by the mighty lungs of Billy Thorpe and the murderously loud Aztecs, the fusion of electric blues and beer was immortalised at Sunbury, to the detriment (some would say) of variety and nuance in the local music scene. Still, the double album released by EMI is a very enjoyable snapshot of a small selection of bands and something of a collector’s item to fans of Aus rock. For this Aussie music fan, the album was a long sought-after grail due to the inclusion of Mike Rudd’s Spectrum and their alter ego, The Indelible Murtceps. 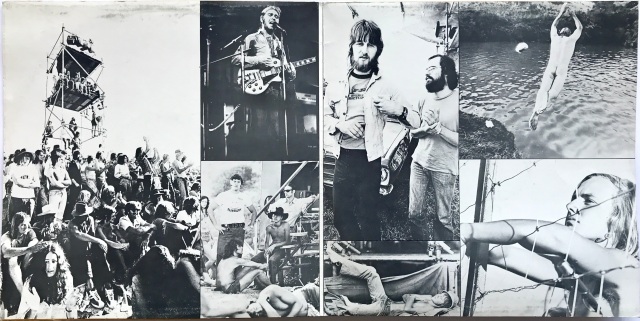 If you have a rock festival story, please feel free to share it!