I have a problem.

It’s a space and time problem. Yes, I know, I should just call Dr Who but I’ve lost the piece of psychic notepaper with his mobile number and you’re my next best guess. Also, you have helped me before. Being such a busy virtual confidante you won’t remember, but I once asked you about whether to buy the rather expensive Can vinyl box ‘The Lost Tapes’. You said ‘Buy’. I bought. Brilliant.

I also asked you about the 2009 luxury re-issue of Tubular Bells with CDs, a DVD, assorted memorabilia and a small plastic zip-lock bag of Mike Oldfield’s fingernail clippings. You were unequivocal.

‘Don’t buy. You don’t even like Tubular Bells apart from the guitar riff bit.’

I bought anyway. (You were right, by the way. Although the DVD is a live TV performance and provides a delicious who’s who of British progressive musicians circa 1973).

Today I need your help with a different conundrum.

Last weekend I bought a copy of the Graham Nash album Wild Tales. I already have a US copy with a nice textured sleeve but this one was a smooth gatefold cover. No, it doesn’t matter what’s inside the gatefold.  It’s the gate that’s important, not what’s inside. What’s that? The music? No idea. It’s probably more than twenty years since I played the album and I don’t recall being very impressed. And don’t even think of asking the obvious question. Really. If you need to ask why I bought a second copy of a minor album I never play then you shouldn’t be doing this job.

I know I haven’t articulated the problem yet, but you need more background.

And the background problem is that of space.

Most of the changes in the music room have been increasingly desperate measures to expand the volume of LPs and CDs this very finite space can hold. I’ve gone as close to the ceiling as a tall-ish person can reach and as tightly packed as a lover of elbow-room can tolerate. But somehow it’s not enough. It’s never enough.

A solution is in train. Some more efficient shelving units have been purchased and are awaiting assembly and the strengthening necessary to avoid any catastrophic outcomes. You think I’m jesting about the reinforcement? Just another example of vinyl neurosis? Ha! Check this out: 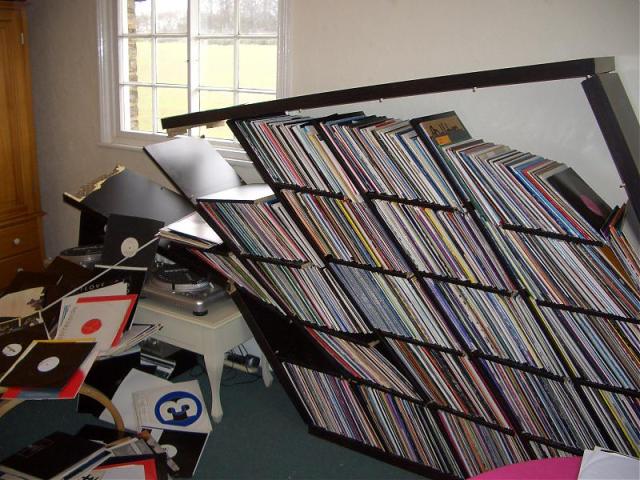 And what’s even worse is that the turntable is under there somewhere. Glad it’s not my pad.

Stopped trembling yet? Then let’s continue.

Back at Chez Vinyl Connection, you have to wiggle a new album into its allotted alphabetical spot on already crowed shelves. This involves pulling increasingly pained ‘don’t damage the record’ type faces as you do. It’s a problem.

So one way to decide about the Graham Nash would be to simply keep the thinner of the albums.

One quick trip to the garage to grab the micrometer later…

There is approximately one millimetre difference between the gatefold version and the US edition. Not even this delusional record collector can convince himself that this is a significant space saving.

There must be other criteria. 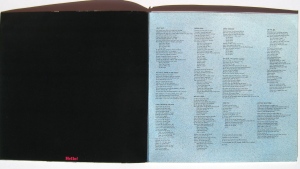 An obvious one is the condition of the record. Which one sounds better? But this, dear Vinyl Agony Aunt, involves listening to the album not once, but twice. When you have a very significant number of un-listened-to albums, time is of the essence. Or at least at a premium. In sum, I don’t really want to spend precious listening time with an album I might never again listen to before the entire collection becomes a problem for my next-of-kin.

Although Wild Tales has a diversity of styles and songs just like its outstanding predecessor Songs for Beginners, for this listener it just doesn’t gel. The main reason for this is the prevalence of pedal steel guitar. It’s not an instrument I really appreciate; just too country I guess. So I struggled with Side One of Wild Tales because three of the five songs feature pedal steel.

Having said that, the side opens strongly with the title track. David Lindley on slide guitar is great and the song rocks. We slide straight into ‘Hey You (Looking at the Moon)’ where Nash’s harmonica wheezes an everyday solo. It lopes along OK enough for a country-ish song. ‘Prison Song’ goes for some worthy social relevance and is fine; it doesn’t soar like ‘Chicago’ from Beginners though.

‘You’ll Never be the Same’ is pure country.

David Crosby makes a welcome appearance on the side’s last song ‘And So It Goes’ which, if Stephen Stills had added electric guitar instead of the pedal steel might well have been a CSN classic. Oh well. 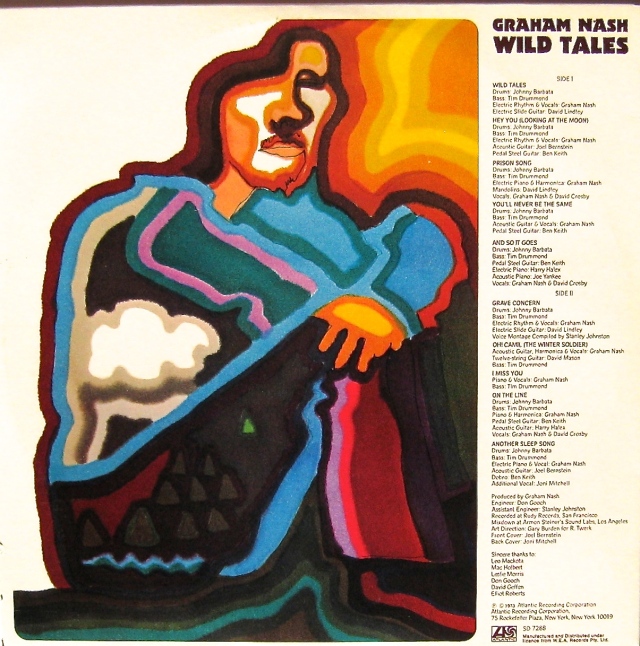 I wonder if my overall disappointment with the album would have been less if the sides were reversed. Because I like Side Two. Opening with the chin-jutting anti-war ‘Grave Concern’, it jumps to Dylanesque anti-war folk with ‘Oh! Camil (The Winter Soldier)’.

‘I Miss You’ evokes the previous album’s ‘Simple Man’ in a pleasing way and ‘On the Line’ is a strong enough song that the pedal steel sort of slides past. As the title suggests, ‘Another Sleep Song’ continues the intimate concerns of Beginners ‘Sleep Song’. Nice bass playing by Tim Drummond and Ben Keith moves from pedal steel to dobro, complimenting the acoustic wispiness. Those with sharp ears might detect Joni Mitchell contributing backing vocals to this last song, though her presence is easier to detect in the back cover art work: a colourful portrait of singer-songwriter Nash which contrasts strongly with the sombre cover photo. Perhaps the album could have used a bit more felt-pen vibrancy (and less pedal steel guitar).

Use a TARDIS for your music collection.