IN THE COURT OF THE CRIMSON KING

A reflection in two parts by a grateful subject

Has there been a more spine tingling opening to an album than the beginning of In The Court Of The Crimson King? An interstellar wind approaches from the depths of nowhere, fades, then explodes into one of the monolithic riffs of rock. A moment later a distorted Dalek voice rasps out of the speakers.

In the central section the sax shrieks and wails as Michael Giles percussion clatters underneath. The pace accelerates with some scat unison playing before an angular, jarring guitar solo from Robert Fripp, spurred on by Greg Lake’s prancing bass. Some squalling Ian McDonald sax, another running interlude, then we return, as we must, to that riff again.

Nothing he’s got he really needs

Then it crashes and burns, screaming.

As the gentle strains of ‘I Talk To The Wind’ waft in, you find that you’ve been holding your breath. Exhale with a sigh. This is pleasant interlude to recuperate. Ian McDonald’s reeds and woodwinds add pastel colours; Robert Fripp’s brief guitar solo is appropriately reflective.

A timpani roll rises to introduce ‘Epitaph’. Mellotron (McDonald again) and guitar (Fripp) state the melodic theme and Greg Lake sings Sinfield’s story of confusion and despair. The tone is epic, the music sweeping, the lyric portentous and perhaps just a little pompous.

Knowledge is a deadly friend

When no-one sets the rules.

The fate of all mankind I see

Is in the hands of fools.

Almost half a century on –well into the 21st– we now know that our fate is in the hands of merchant banks and multi-nationals. It is notable that this song is an early example of the full dramatic Greg Lake vocal style. So perhaps is it not surprising that Lake interpolated a fragment of ‘Epitaph’ into Emerson, Lake & Palmer’s live version of ‘Tarkus’ on their 1974 live triple album Welcome Back My Friends… 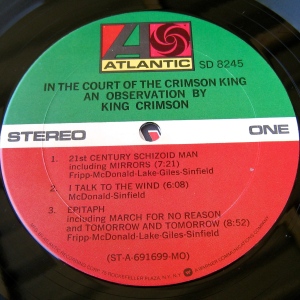 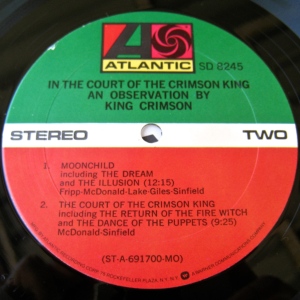 ‘Moonchild’ could not offer a more bucolic opening to the second album side. It is a gentle hippy reverie, replete with acoustic guitars, twinkly cymbals and a hushed, almost reverent vocal from Greg Lake.

Playing hide and seek with the ghosts of dawn

Waiting for a smile from a sunchild

The tinkly improvised section was always denigrated by Robert Fripp, so much so that he insisted on excising three minutes for the 2009 fortieth anniversary re-issue. Although I’m usually a stickler for authenticity (Don’t mess with my heritage, bozo!) to be honest, I don’t find that anything is lost here. Especially as the original version is included as a ‘bonus’ on the same CD edition.

With a mellotron washed fanfare opening, the final track stands as the exemplar of both this startling debut album and indeed the two King Crimson albums which follow. Let us, bowing slightly, give the piece its full title: ‘THE COURT OF THE CRIMSON KING including THE RETURN OF THE FIRE WITCH and THE DANCE OF THE PUPPETS’.

Sure, this is the stuff that progressive non-believers like to pillory yet there’s a swaggering imagination and a grand rainbow-hued vision that charmed those open to its siren call way back then and could still do even now, if you’re willing to drift beyond and before. In fact that last idea pretty much summarises the album.

The keeper of the city keys

Put shutters on the dreams

This was a time when young people were pushing open those shutters. Their musicians were doing the same, refusing incarceration in the grey shell-shocked stagnation of elders desperate for stability but bereft of vision. Sharing his thoughts about this creative missile in a press advertisement, Pete Townshend called the album ‘an uncanny masterpiece’. This from the man whose ground-breaking ‘rock opera’ Tommy was released less than five months earlier.

The music of In The Court Of The Crimson King revealed possibilities of what popular music could be if freed from its blues-rock roots; it picked the lock of conservatism and pushed forward towards… what? Doesn’t matter. It’s the pushing that’s important, the willingness to venture beyond the fields we know, the refusal to congeal into stasis.

That’s what progress is. An adventure, a risk, an expansion of possibility.

Buying a new record was a big deal back in the day.

In between leaving uni and taking the train home I’d often do a circuit of the city record stores searching for a bargain or hoping for the lightning strike of extravagance that resulted in the purchase of a full-price album. It’s all about priorities: if your threads come from charity shops you can sometimes splurge on the real necessities of life.

The city of Melbourne had much to offer the music fan: Euphoria, Archie ‘n’ Jugheads, Discurio, Clements basement, Pipé, Pop Inn, Batmans, were all frequented by those who would rather be seen dead than caught browsing in the tediously mainstream Allans or Brashs let alone the music section of Myer the department store. Unless there was a sale, of course.

Often I’d flop onto the train empty-handed in terms of vinyl but with an incremental increase in my knowledge base. Flipping through LPs, studying the artwork, lifting out an album here and there to scan the back cover, noticing the instrumentation, logging the musicians… building an analogue database.

There was also an element of romantic yearning; picking up the same LP week after week, gazing at her cover – sorry, it’s cover – and replacing it tenderly in the racks with a barely audible sigh. Rarely did the impoverished socially inept earn the right to take home the prize.

It is ironic that one of the albums I gazed at with considerable desire over a protracted courtship period had one of the ugliest covers in album-cover history. Eyes wide with terror at a glimpse of something demonic coming up from behind and below, flaring nostrils sucking airpower for the scream bursting out of a gaping mouth full of stained uneven teeth; livid pink face, bruised-blue skin creased with fear… an enduring nightmare image.

Decades later, Barry Godber’s painting still has the power to startle, to confront. 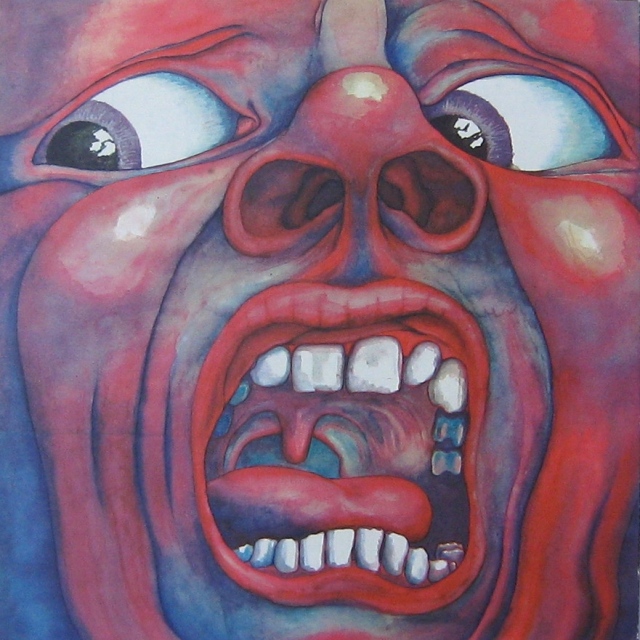 Turn it over and the head echoes off into a blue space-void. There is nothing to ground humanity here. No context, not even text. Just this on the spine:

As this was a sealed US copy, plucked from the racks of an import store that shall – for reasons which will become clear – remain nameless, I could not access the inner gatefold. But I wanted to, desperately.

And so, after much humming and sighing and general prevaricating, I took the plunge and bought the record. I don’t remember the price tag but for someone who had to consider whether a second cappuccino was viable on any given day, it was a lot. 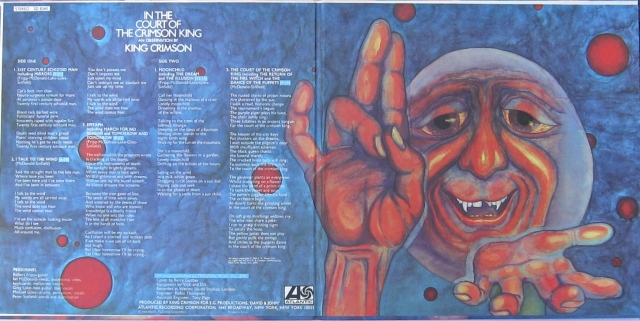 Fast forward to the gentle end of ‘I Talk To The Wind’. I’m sitting before the stereo, rapt and wrapped in the music. The pretty flute melody fades down as a synth note fades up. But what’s this! A nasty repetitive clicking that is certainly not part of the music. And it’s just keeping on clicking, every two seconds.

This is a brand new record. Damn! What to do? Disturb the first magic listen to examine the offending vinyl or wait until the side ends? A couple of minutes into ‘Epitaph’ the unwanted percussion stops; I sink back into my chair, heart beating out of phase with the surface noise, and try to re-focus.

The wall on which the prophet wrote

Is cracking at the seams

But I fear tomorrow I’ll be crying…

Examining the disc, the problem is clear. There is a deep 5mm indentation right at the beginning of the third track. Looks like someone has dropped a screwdriver onto the record. This was a new sealed record. It’s clearly a factory fault so I’ll simply return it tomorrow and get a replacement. No problem.

Except it is a problem. The bloke in the tiny shop, no older than me but with longer, cooler hair and a whole lot more attitude, glances briefly at the record and returns it to the sleeve.

A swirl of panic and outrage surges through my gastrointestinal region.

‘It’s not.’ I can hear the twist of desperation in my own voice. ‘I didn’t damage the record, it came like this’.

But I persist, desperate.

‘You couldn’t make such a scratch with a stylus, not with a brick on top!’

But the prickling behind my eyes and his slight sneer tell me this battle is irrevocably, devastatingly, lost. Disembowelled by a superior predator, I shove the LP back into the carry-bag and flee, defeated.

Back home, I experiment with ratcheting up the weight on the tone-arm. The noise just gets louder. I lighten the tracking weight, the stylus sticks. I return the weight to the original setting. It’s still sticking. This is getting worse. It is not fair. Despair, never that far away in those days, shuffles forwards. Somewhere further back rage lurks, denied but palpable.

I sit, holding the flawed disc. A memory surfaces of a visit to a teenage cousin some months back, how I was appalled at her treatment of records. Naked on the floor, dumped on top of speakers outside their covers – let alone the inner sleeve – I wanted to run screaming from the room.

‘How do they still play?’ Surely she heard the anguish in my voice.

‘Oh, sometimes they don’t,’ she said cheerily. ‘If there’s a big scratch I do this…’

Picking up a scuffed LP she produced a match and after locating a suitable surface wound rubbed the non-ignition end of the match vigorously back and forth along the line of the grooves. ‘That usually fixes it.’

Well, if it worked for 20 Electrifying Hits, maybe it’ll work for King Crimson.

It does not. The stylus is still sticking and now there is a graze surrounding the gash. Some sort of madness then takes hold. If the record is mortally wounded then I may as well try the equivalent of amputation, or more accurately, by-pass surgery. It occurs to me that maybe I can cut an angled groove from the beginning of the scratch to the end, like a run-out groove. Thought passes to action with no discernible review process; a hobby knife is located and the carving begins.

Bizarrely, although I’ve managed to double the pop, the stylus is at least tracking through the song; it just lasts a bit longer now and is in, um, stereo. I decide I’d better quit while I’m ahead. Or behind. I comfort myself with the revenge fantasy of squeezing superglue into the locked door of the record shop. Anarchy rules. Right on, schizoid man. 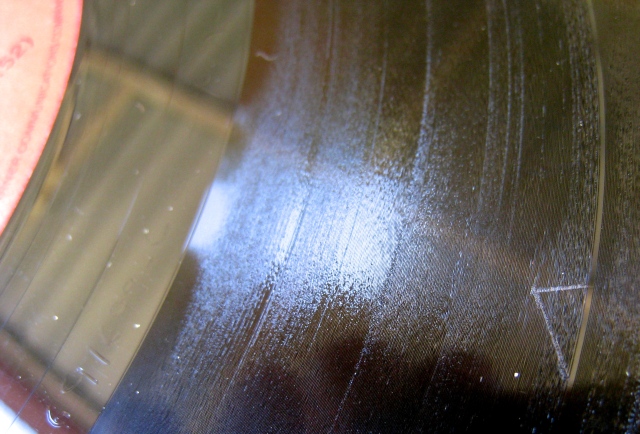 I played the vinyl of In The Court Of The Crimson King today and was transported to a world of technicolour imagination, of wildly creative composition, of brilliant musicianship, and of fine production. At the beginning of the third track I took a brief detour into my own past but was delivered back to the present by the magic of the music. Now, as then.

I’m not going to argue with Pete Townshend on this record; an uncanny masterpiece, scratches and all.