ENO ON THE BEACH

On the Vinyl Connection coffee table is On Some Faraway Beach, David Sheppard’s 2008 biography of Brian Eno. It is a substantial and thoroughly researched tome covering the birth, growth, education and unfolding of non-musician Brian Peter George Jean-Baptiste de la Salle Eno. Sheppard even demystifies the preposterous name.

Now Mr Eno is a most interesting character and his story makes for an entertaining read, charged as it is with showers of the man’s creativity and spurts of his eccentricity. And quite a lot of shagging too.

Most readers will know Eno from his vital quasi-musical role in the formation of Roxy Music. If you don’t know Roxy with Eno, read this terrific piece on the first album by Mr 1537. Then acquire both it and the even better second LP, For Your Pleasure. That will bring you to the point where Bryan (Ferry, of course) and Brian (our hero) parted company with extreme prejudice. Well, more cool English politeness. Yet part they most certainly did. Icy looks at dawn and all that.

Eno had a couple of songs, lots of ideas, and a solid cohort of Roxy friends and extras. He herded this crew into the decidedly un-hip Majestic studios – recording space and control room conveniently behind a large bingo hall – and got down to it. 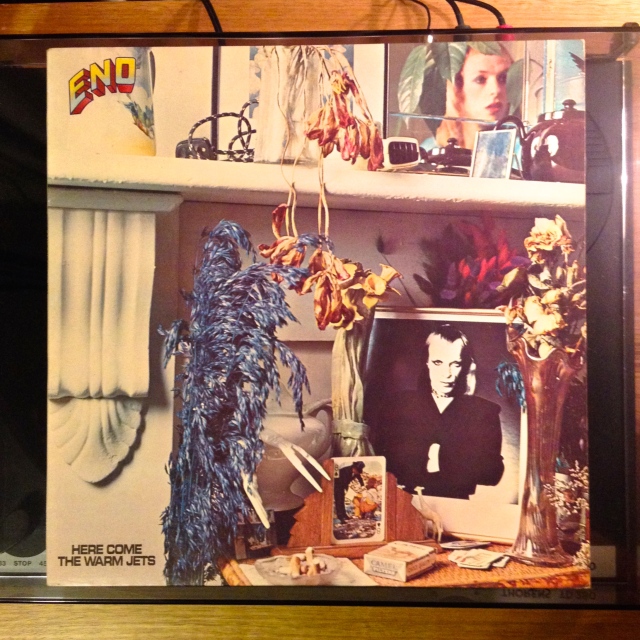 The result was Here Come The Warm Jets; exciting as a lucky dip filled with burning fireworks and varied as Eno’s 70s wardrobe. Opening with the squalling Velvet Underground guitars of “Needle in the Camel’s Eye”, Eno multi-tracks his voice to declaim a lyric notable only for its banality:

They say Brian Eno has a brain the size of a planet. Must have been lost in space at the time, but who cares as Phil Manzanera and Chris Spedding thrash those churning guitars. There’s a rising line punctuating the middle of song that really pulls you in… then it stops. I love a song with a stop – you know, where the song has a brief gap before continuing – and this one has three. Talk about 70s indulgence.

“The Paw Paw Negro Blowtorch” has a strange falsetto vocal; shades of camp Lou Reed or perhaps even anticipating David Byrne. (Talking of colour, you wouldn’t title a song like that now, would you? Sheppard justifies it loyally, but it’s simply uncomfortable). There is a brilliant and very silly synthesiser solo that somehow evokes both “Virginia Plain” and a drunk Robby The Robot before more chiming, treated guitar. The song segues into the piss-taking but absurdly catchy “Baby’s on Fire”. Robert Fripp’s guitar solo is – to employ an overused music cliché – incendiary. Or to use a bespoke Vinyl Connection phrase: fucked up and fucking brilliant. I love that Eno offers him a light; Fripp takes the match and razes the damn neighbourhood.

Apparently Eno was using dream-like images and impressionistic (expressionistic?) stream-of-consciousness for his lyrics. Could be; many of them make no sense at all while others evoke something almost, but not quite, totally unlike real life.

Take your time she’s only burning

This kind of experience

Is necessary for her learning

The man’s love of doo-wop and 50s vocal pop comes through in the rather uninspired “Cindy tells me” though Phil Manzanera provides a tasty guitar solo and the background synth colours are 1973 fresh.

The first side of Eno’s first solo album concludes with “Driving me Backwards” a wailing vocal over a lumbering piano. This is the most confronting song on the album; musically constrained and trumpeting the limitations of Eno’s vocal prowess, it grinds onwards relentlessly. The phasing of the guitar stabs between the speakers is disorientating as the distortion builds. “Driving me backwards” is a special song for those angry paranoid times. 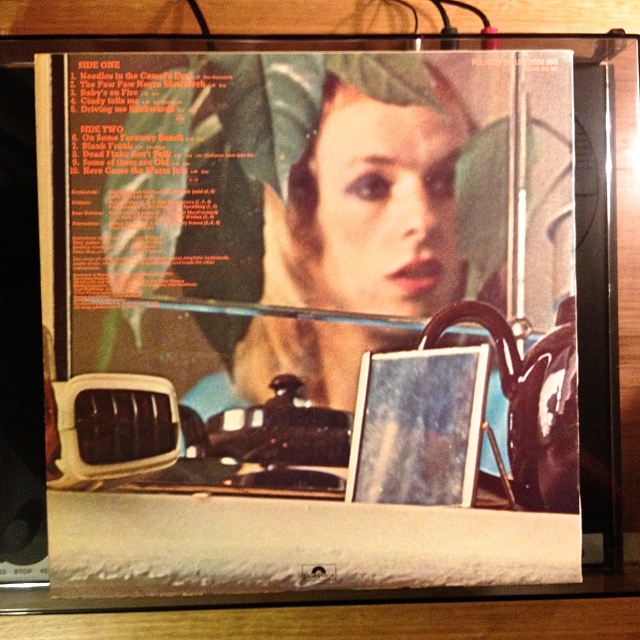 On some far away beach

When the season’s over

As the tide brushes sand in my eyes

Cast up on a plateau with only one memory

The opening of side two of Here Come The Warm Jets could not be more different from the first side. A rich chocolate wave of choral lushness rises over a piano figure until, after a build-up of almost sobbing intensity, Eno’s brief verse appears, sad and beautiful. The ending jars slightly, a wonky reminder of the simple piano figure, then slam! the snarling “Blank Frank” bursts forth with menace, machine guns and a Bo Diddley beat. It’s punk as fuck and a thrilling transition from the sunrise cinema of “On some faraway beach”.

Much has been made of Eno’s apparent aping of Bryan Ferry on “Dead Finks don’t Talk”. Our man denied it at first, though later conceded that there may have been ‘unintentional’ connections. Sure, Brian. It’s a loose, slight piece whose most interesting moments come in the experimental ending that segues into “Some of them are old”, a gentle song permeated by an air of nostalgia and resignation oddly enhanced by Lloyd Watson’s slide guitar. I love the closing gongs that evoke – maybe – distant church bells.

And that just leaves the title song. “Here Come the Warm Jets”, whose buzzing multi-layered guitars provide a buffed bookend to the opening snarl of “Needle in the Camel’s Eye”. If you imagine the drums lifted much higher in the mix, there is a distinct flavour of Can here. Eno’s vocal sits back in the mix, a monotone line that the guitar melody seems to weave around hypnotically. The waves scour the shore, the tide washes sand in our eyes… 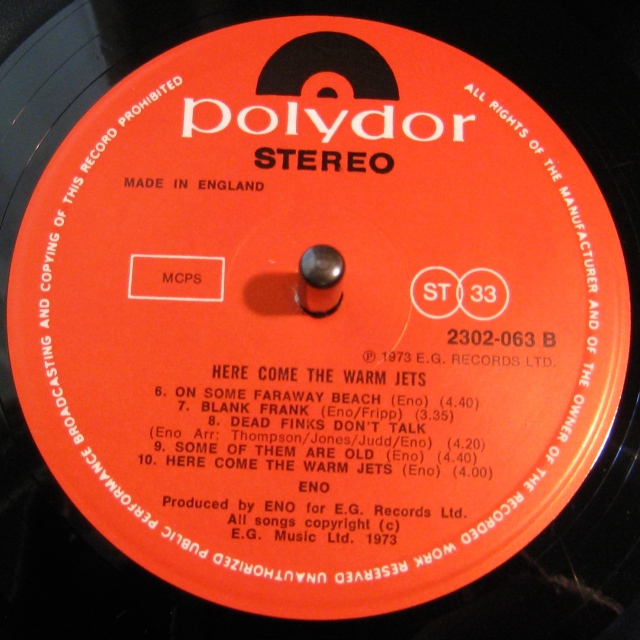 When it comes to assessing their own work, musicians are notoriously myopic. “The new album is my best ever.” Disagree if you dare. Yet the world and its dog know with absolute certainty that the best work is now four decades in the past.

So it was refreshing – impressive even – to read in Sheppard’s book the comments of Eno to writer Ian MacDonald in 1977 when pondering the critical accolades heaped upon Here Come The Warm Jets.

I didn’t think it deserved the good reviews it got. There was a sort of mystique about it which protected it – made you think that if you didn’t like something about it, it was your fault, not mine.

David Sheppard summarizes the glam diversity of Jets as an uneasy amalgam of “Anglicized Velvet Underground art pop, baroque Beatles-parody, electronic tone washes, sardonic, sub-1950s doo-wop pastiche” (page 150). While I have no major quibbles with that conglomerate description, it is the vivid, bravura energy of creativity and devil-may-care adventure that makes Here Come The Warm Jets an enduringly enjoyable experience. This is the album of a bubbling provocateur who was totally at home being interviewed for NME by a young Chrissie Hynde while wearing a red satin kimono and showing his freshly depilated pubes.

It may be a confounding image to picture a pale effete Englishman swaggering through a landscape of synthesised noise, distorted guitars and transmuted pop sensibilities, but that’s what is on offer. It is as curiously exotic as the rag-bag of objects pictured on the cover, including Eno’s lush make-up and the ‘pornographic’ playing cards (that have nothing at all to do with the title of the album. Nothing). Eno wasn’t taking the piss, he was filming it. Four decades on the film is still marvellously entertaining; tumescent with mischief, wit and experimental verve.

← BACK TO TOMORROW
GRASSED UP →