While we love celebrating album cover art here at Vinyl Connection, it’s worth remembering that those sleeves contain records (or, ahem, CDs). So for this first edition of (yet another) occasional feature called “Listener’s Digest” I have chosen four albums that appeared in Album Cover posts over recent months.

Variety being the ear-spice of musical life, we have one album from each of the 60s, 70s, 80s and 90s. Plus four diverse genres: Electronic, Progressive, Singer-songwriter, and Alt Pop. Something for everyone, with any luck. 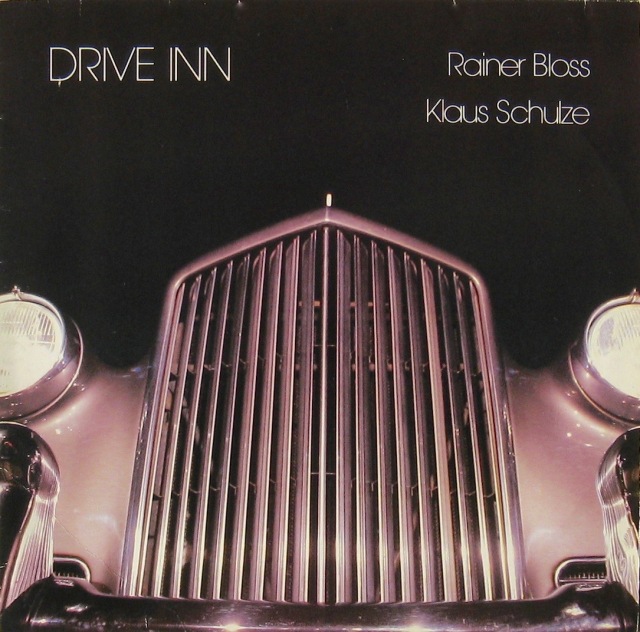 A collaboration between legendary synthesiser wiz Klaus Schulze and Rainer Bloss, Drive Inn sounds very much of its time — mid-80s sequencers providing a bright palette of synthesised sounds. Bloss had recently toured with Schulze, appearing on the latter’s 1983 Dziekuje Poland double live album; clearly the collaboration was a positive experience for both musicians.

Side one has four shorter pieces that motor along – nothing really zooms, nothing crashes. Opening piece “Drive Inn” sets off at a smart clip, cruising through the suburbs until – with a burst of Fairlight orchestral flashes – it warps into the distance. “Sightseeing” has those twittering flutey calliope voices that scream “New Age”, though this is undercut by the vigorous percussion. Fairly tedious, though. “Truckin’” is not the Grateful Dead live staple, but a brooding piece that strongly evokes the contemporaneous film music of Tangerine Dream. Creepy synthesised strings make this my favourite track on the album. 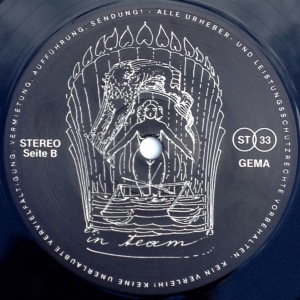 Side two shows more variation, though still travelling comfortably along a pre-planned route. First up is “Racing”, unsurprisingly a fast-paced, percussion heavy ride with odd strangled vocalising that, frankly, sounds more like someone experiencing gastro-intestinal pain than anything automotive.

At just over 11 minutes, “Road Clear” is the centrepiece of the album and quite satisfying. Several melodic threads weave in and out of the traffic, changing lanes now and then – but never dangerously. Rather like and updated “Autobahn” but without the wit and retro-wink of the Kraftwerk classic. Sign-posting the destination is “Drive out”, a mid-sized van of a piece rolling down the highway towards the final truck stop.

Bloss went on the make two further volumes in the Drive Inn series; I don’t feel a pressing need to take those trips. But this one is fine. Why is it here? Its’ cover provided the feature image for the initial ‘Car Covers’ post. 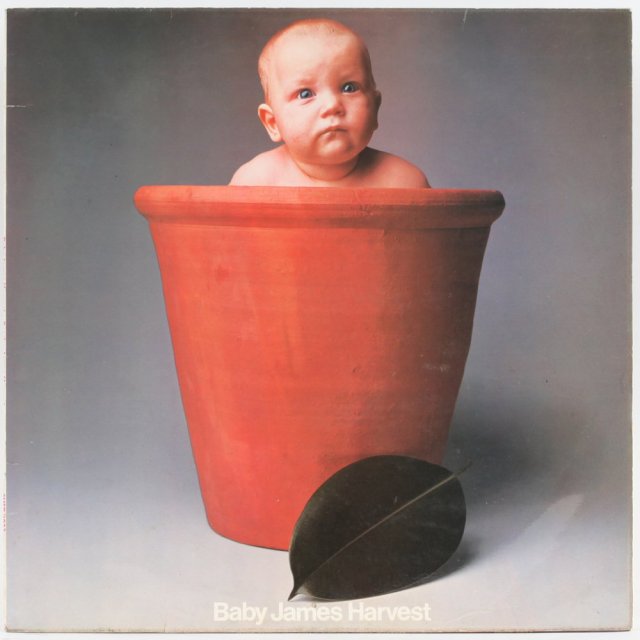 I have to confess that I am not a big Barclay James Harvest fan. If you are, best to skip the next couple of paragraphs to the other James. At various times I’ve owned (and listened to) a dozen BJH albums but rarely have I been excited. Even the earlier stuff has less interest than you’d expect from a band who first released their ‘progressive’ music in 1970.

Baby James Harvest is their fourth album, from 1972. Four long-players in two years. That might just tell you all you need to know. Frankly, I bought this for the album sleeve, having been searching not-very-hard for a decent baby cover to use in a long-planned Birth to Death album cover project. The project realised, I thought I’d better give the LP a spin. Sadly I cannot report a bountiful harvest of interest. It’s all so nice, so safe, so late-70s Moody Blues. 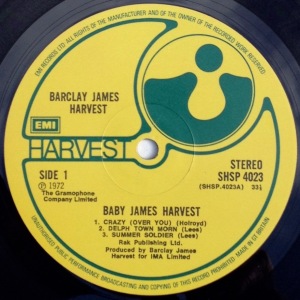 Only one song stood out in two attentive listens: “Summer soldier” is an interesting arrangement with some well-assembled sound effects contributed by the producer, Peter Tattersall.

Here is an uncharitable alternative: 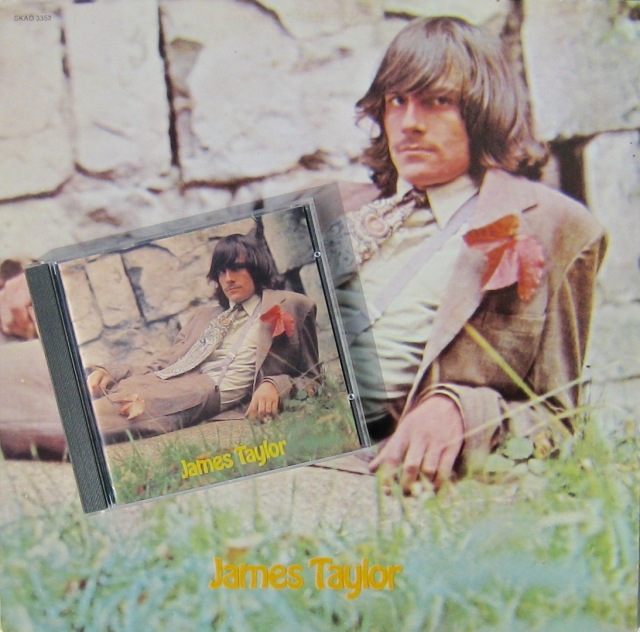 James Taylor having provided the backbone of the 9 Lives cover story, it seems only fair to visit one of his albums.

Young James was amongst the initial wave of singer-songwriters. His first, self-titled album was released in December 1968, nine months after Joni Mitchell’s Song To A Seagull and a month after the first solo release by Neil Young. That it was recorded in London and released on the Beatles’ Apple label adds groovy historical context to what is a very strong debut.

Produced by Peter Asher, James Taylor consists of an interconnected suite of a dozen acoustic songs, some enriched by subtle strings and linked by sweet little instrumental interludes. From the opening ‘Don’t talk now’ where the simple, catchy tune is accompanied by bluesy harpsichord (true!), if you let yourself be drawn into this beguiling land of whimsical observations and puzzling relationships you will emerge at the end with a quiet, satisfied smile on your face. 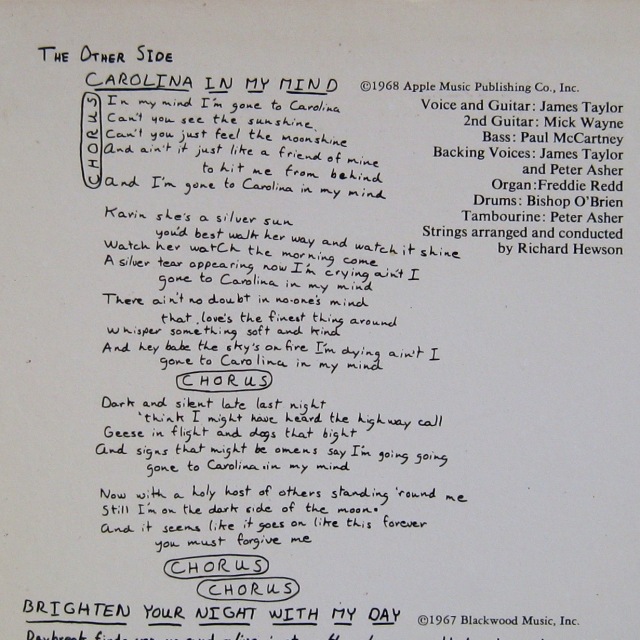 It all fits together so well it is not especially helpful to trawl through the songs — either you enter this gentle chamber pop kingdom or not — but let me highlight a couple of favourites.

Taylor’s song relating his time in a psychiatric institution, ‘Knocking ‘round the zoo’, is both self-aware and angry.

There’s a chick who’s paid to be my slave

But she’ll hit me with a needle

If she thinks I’m trying to misbehave

‘Something in the way she moves’ and ‘Carolina in my mind’ have become classics of the singer-songwriter genre and with good cause. Both are strong, timeless songs. Paul McCartney plays bass on the latter, which was released as a single. I’ve sung along to it many times…

Can’t you see the sunshine

Can’t you just feel the moonshine

And ain’t it just like a friend of mine

To hit me from behind

It’s the hurt in that final line that adds depth. Shadows and light.

‘Night owl’ versus ‘Brighten your night with my day’

Welcome to the cloudy sunny world of James Taylor, terrific in 1968, still going strong in 2015. 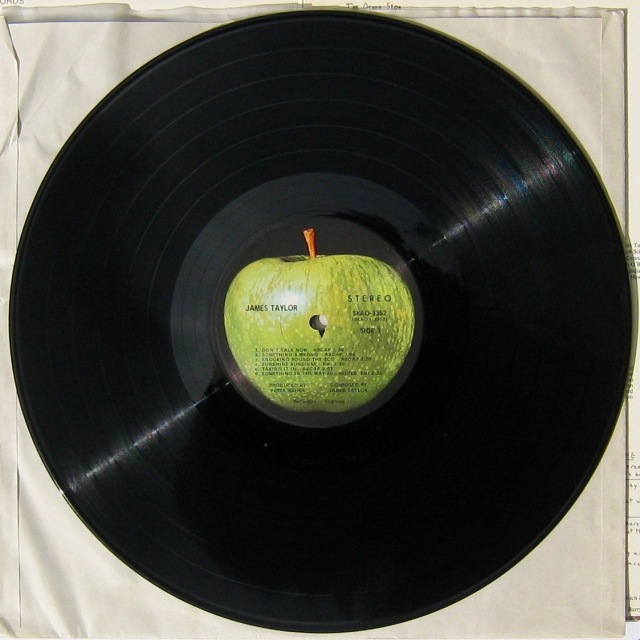 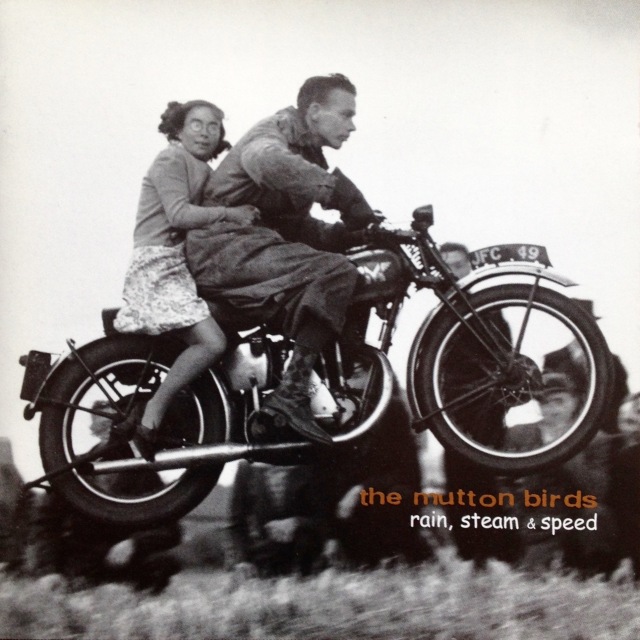 The Mutton Birds were a 90s New Zealand band based around the song-writing prowess of Dan McGlashan. Rain, steam & Speed was their final studio album, released in 1999 and chock full of songs that might have been written by a less satisfied Neil Finn, sung in a voice like an antipodean Joe Pernice.

There’s a thin strand of winter inside

No matter how hot it gets

But there is a consistent self-mocking humour that prevents McGlashan’s songs descending into bathos. In ‘Goodbye drug’ he takes a recent ex- to the airport.

I got you coffee from the machine

It was a grey and it smelt like kerosene

But you took it and you left town

Along with everything that wasn’t nailed down

The wonderful cover photo is credited as “Airborne biker, 1940” by Hulton Getty and appeared in the post 10 MORE MOTORISED ALBUM COVERS.

If you don’t know New Zealand alt-pop, check out The Mutton Birds. I recommend starting with the marvellous Envy of Angels.

Tell me this cover doesn’t earn bonus points for style. Go on, I dare you.