Several ‘Album Anniversary’ posts have appeared here at Vinyl Connection. We have cruised to Köln with Keith (Jarrett), raved about Relayer and hung out with the Minstrel In The Gallery forty years on. Sometimes it’s just too hard to resist the lure of the decade-driven ‘It was twenty (thirty, forty) years ago, today…’. Yet I’ve never taken a systematic approach, the kind recently embarked upon by Rich over at KamerTunesBlog for the year 1986 under the banner ‘Thirty Year Thursday’. But I’ve thought about it, oh yes indeed. Over the past couple of years I have been wondering about putting the Vinyl Connection diversity on hold for the whole of 2017 to focus exclusively on albums released fifty years previously. The Good, the Better, and the Essential from the watershed year of 1967. It is a treasure trove, believe me.

The jury is still out on that idea, yet one way of testing the waters, in terms of writing, readers, content, discipline —all the blogging parameters in fact— is to experiment a little. So over the coming weeks and months I’ll aim for some posts that dip into the years 1956, ’66, ’76, ’86*, ’96 and even ’06. A sort of longitudinal ‘Listener’s Digest’.

To get yourself in the mood, you might want to sing along with ‘Snoopy and the Red Baron’ (released in 1966, of course).

Was rollin’ out the score…

At the end of our recent holiday at the lovely coastal town of Inverloch, we relieved the house’s enormous and bountifully laden lemon tree of a bag fullof fruit with the intention of making lemonade. Well, the ‘making’ intention was Ms Connection’s, aided and abetted by the boy. My intention was to drink the results. But when the lemonade-making process was undertaken, I found an extra role: provide the soundtrack. Bet that surprises everyone as much as it did Ms C.

I could have gone The Lemon Pipers or even Lemon Jelly, but I went for the most obvious choice: The Lemonheads.

Car Button Cloth was The Lemonheads’ seventh album, but the third of those that garnered some chart action in the 90s. In it, the songwriting of main man Evan Dando turns a little darker (‘Hospital’). The humour has a sharper, sadder edge, as in ‘The Outdoor Type’ which has the marvellous ‘stay indoors’ excuse, ‘What if something is on TV and it’s never shown again’. Titles like ‘Losing your mind’ (a rolling guitar lament), and ‘Something’s missing’ (grunge-ish rock with tortured guitar solo) give a clear hint that Mr Dando was not travelling well. Interviews at the time were notorious for his state of fuckedupness. The single ‘If I could talk I’d tell you’ was perhaps as much a description of Dando’s physical state as his emotional inclination to communicate. Still, it’s a glorious piece of jangly power pop that soars melodically and adds zest to your lemonade.

Points for creative use of the limited CD insert

Parts of the album —namely those that use huge electric guitar swells and the closing instrumental ‘Secular Rockulidge’— remind me of the 1995 album Neil Young made with Pearl Jam, Mirror Ball. Other songs (eg: ’Six’) are more punkabilly. There’s even a bit of country (‘Knoxville girl’). Have to say, I quite like the darker feel of this 1996 album though there are few sunny alt-pop moments.

The cover of Car Button Cloth is allegedly from a grade-school project of young Evan’s. ‘All of these things sank’ he wrote. Much like the Lemonhead’s career after this album. Still, the lemonade was good and the rest of the drink-making cohort missed the darker overtones, focussed as they were on the sunshine textures of a quintessential summer drink.

Despite well over ten years of studying piano and achieving some degree of technical competence, I never became a musician. Never managed to get digest the music, never felt the things I played inside my insides. Perhaps that’s why I became such a voracious accumulator of others’ music. Whatever. If I had become a fair dinkum musician, I’d have loved to play the organ. Move over Jimmy Smith, there’s some pasty-faced white boy wanting to give The Sermon!

Another instrument I really enjoy and would have loved to play is the vibraphone. Something about those ringing, endlessly sustained tones cascading from the mallets of Milt Jackson or Gary Burton makes me smile. So cool, so melodic.

As a result, finding a 2006 album by Hammond organ-master Joey DeFrancesco that featured vibist Bobby Hutcherson brought a grin of pleasure.

It’’s a nicely constructed jazz album that opens (slightly surprisingly given the names just mentioned) with robust blowing by tenor sax player Ron Blake (who also plays some soprano and flute) but soon settles down into a swinging modern jazz groove that rarely jolts and always pleases; smooth, melodic, tasteful. Although it probably does not measure up to Bobby Hutcherson’s earlier work in terms of excitement and innovation, Organic Vibes is a classy album that goes down like a mature Cabernet Sauvignon. 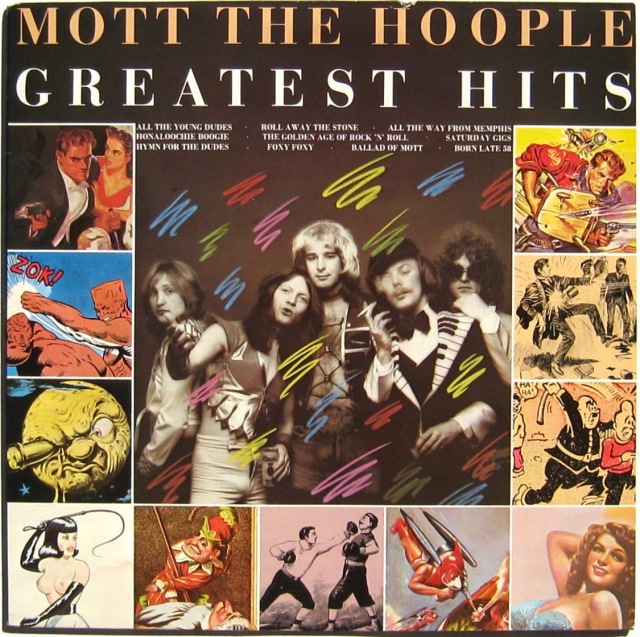 We are only a few weeks into 2016 yet already it is shaping up to be a bad year for rock musicians going to the great gig in the sky. On 17th January, The Afterlifers (as they will henceforth be known) gained another drummer when Dale Griffin of Mott The Hoople died, aged 67.

The Mott story is well-known. After struggling to sell albums —despite a strong live following in their UK homeland— the band were about to pack it in. Enter David Bowie, who offered them ‘All the young dudes’, giving them a chart leg-up and enough momentum to continue for several more years. Sadly ironic, isn’t it, that Griffin should exit just a few days after their songwriting benefactor.

Personally, I’m not a huge Mott fan. I find too much of their work derivative. When Mott started, Ian Hunter’s vocal stylings were pure Dylan (listen to ‘Backsliding fearlessly’ from the first album) and later he too often strays towards the histrionic end of the spectrum for my taste. Yet at their best, on songs like ‘All the way from Memphis’, ‘Roll away the stone’ and of course ‘Dudes’, they lock into a good-time rollicking boogie sound that is great fun. I love a bit of bar-room piano in me rock ‘n’ roll and Mott deliver this on many songs. Although I have a number of albums on CD, I have to say this compilation mostly does the trick when the need for Hoople arises.

So Vale Dale ‘Buffin’ Griffin. By all accounts you were a good bloke, and devoted to your band. And you had a much less silly name than some of your bandmates.

* Having had numerous ‘Cease and desist’ letters from 1537 for including anything even remotely Lego-ish in a photo, I am keen to avoid similar tensions with Rich. The Vinyl Connection legal team cannot defend another front on a different continent. I hope that by staying away from the 1986 mainstream, collision can be avoided.