THE ROAD TO RESTRAINT

I remember seeing a striking cover on shelves in the mid-70s… a slender wrist rises up, clasping a silver ingot like a futuristic advertising photograph. The skin tones are dull, muted, as the shot is taken against a bright white light, a small bright rising star behind the argent rectangle. Behind, surrounding all, a deep cerulean blue; a blue to mesmerize, hypnotize, a blue to drown in. Fighting the infinity of that deep space, clutch at the text, for there are words, or at least the imprint of letters. Hammered into the metal—surely not by that graceful hand?—punched deep into the gleaming skin, is the maker’s mark, the indentation of provenance and intent, a metallic passport stamp:

It is, without any doubt, one of my favourite album covers. And the strikingness does not stop there. Turn over the LP and the deep blue becomes deep red. The image, a silhouette, shows a thermal imprint of a hand (Robert Fripp’s?) held by a woman (the one from the front cover?) backlit by a small bright white light (the same sun?). It feels heavy with symbolism, but not in any language I can decode. Easier to understand is the text. Six tracks, three per side. Three from 1973’s Lark’s Tongues In Aspic, one from the recent Starless And Bible Black (1974), one improv (‘Asbury Park’) and an ‘encore’ of the iconic ‘21st Century Schizoid Man’. The quartet of Fripp, John Wetton, Bill Bruford and David Cross were on an extensive tour of North America in 1974 and it was during this epic road trip that the recordings were made. The cover is credited to Nicholas de Ville with photography by Willie Christie. And the Kirlian Photograph—ah, not thermal, but coronal discharge photography, or so-called ‘aura’ pictures—by a bunch of techno-boffins from Lamar University, Beaumont, Texas.

I studied that back cover intently. Intense scrutiny for intense music. I wanted more and the only way to wring more out of the album was to devour the cover. So it was with some dismay that I reached the very bottom of the text and there, lurking just above the label logo, were three letters to chill a fan’s heart: R.I.P.

Yes, Robert Fripp was announcing the death of King Crimson. It was only a temporary demise, but we didn’t know that then. In fact, history suggests the disintegration was aimed purely at dislodging David Cross, as the violinist was the only member of the quartet not to appear on the next album, Red.

More! The infant bellow of the addicted fan. A mate had a vinyl bootleg from the same tour. Heretic had only two songs over-lapping with USA. I borrowed it and made a copy (which was later transferred to CD-R; how’s that for dedication?). Then, in 1992, came the four CD boxed set, The Great Deceiver with even more music from the same tour. It was expensive, but too much is never enough. When I saw one on special, I snapped it up. Almost too much of a good thing with some five hours of the same basic set list, I never really grappled it to the canvas, and when the 30th Anniversary edition of USA came out in 2002, I traded the quadruple-disc set for an expanded single disc that added ‘Fracture’ and ‘Starless’ to the original USA song-list and as a result felt lean, keen and morally cleansed. Then promptly regretted surrendering the big fat box.

As I’m writing this, the boy is sitting next to me at the dining-room table, grinding out a ‘persuasive text’ for his fifth grade teacher entitled ‘Too much money is spent on toys and games’. I’m offering some assistance as required, but really, if he looked at his Dad’s music buying habits, his essay would be short indeed: YOU CAN NEVER SPEND TOO MUCH ON TOYS!!

Time passes; other King Crimson music is acquired and enjoyed. But something of the mysterious magic of that time, of that tour, lingers. And not just for me, it seems. In 2013 I read of the mother of all USA archival releases. A boxed set of—wait for it!—twenty-one CDs, an audio DVD and two audio Blu-ray discs lavishly garnished with booklet, facsimile press releases, jottings, set-lists, a plectrum indented with Frippertronic teeth marks and one of Bill Bruford’s toenail clippings. It was monstrously expensive (fancy that) and absurd in every respect and I wanted it, wanted it, wanted it…

Then one day just about a year ago, in the well-named Goldmine Records, what do I spy behind the counter but a second-hand copy of The Road To Red in marvellous nick, all shiny and black and into the red. Of course I hemmed and hawed; I have a Master’s Degree in Prevarication. I removed and checked all 24 discs—perfect. Ben offered to knock a bit off the price. I glanced between shop owner and Crimson box.

You can never spend too much on toys.

JUSTIFICATION I — LISTENING AND WRITING

I realised immediately that the best way to rationalise this ludicrous purchase was to write a post about it. A similar strategy served well when I presented radio shows on 3PBS; the outgrowth of the hobby can, via some temporal jiggery-pokery, be used to justify the continued growth of the collection. Just so. I started taking notes as I listened, not only in support of an eventual blog article, but to help focus attention. The listening notes reproduced below will hopefully give a little insight into the actual music. They also show where I am in the marathon journey along the North American Crimson Road, some twelve months on.

JUSTIFICATION II — HOW THIS ARTICLE CAME TO BE

VIN: What should I write about?

VIN: I’d welcome an excuse to write another Crimso post. Any particular period/album/slant?

VIC: A buddy gifted me the four-disc The Great Deceiver set of concert recordings from ’73-’74 when he moved up to some crazy 20/25-disc set from the same era. I have been unable to make the effort to listen/compare all the various improvisations and unique renditions or even to really dive in at all, to be honest. Would you be able to write on any live Crimson from that era?

It’s that Lark’s Tongue, Red, Starless and Bible Black period that I’m most familiar with (and really love), so I’d enjoy your take on that stuff. Another option however would be to be introduced to anything post-1974 you feel especially enthusiastic about.

So there’s too many options for you. Being a glutton, I look forward to all of them…

VIN: Tapping out that query/invitation line to you just before bed last night, I found myself musing on the options as I cleaned my teeth and wondering whether I had a KC story. This is what came to me…

I bought The Great Deceiver 4CD set back in the day, and for reasons similar to what you described; sold it; regretted the loss… Years pass, I see the ‘crazy 20/25-disc set from the same era’ in a shop, decide I MUST HAVE IT then wonder what the fuck to do with this overwhelming box of overlapping music… Needless to say, this line of thought resulted in difficulty sleeping.

VIC: That, my friend, is some serious cosmic synergy/synchronicity. I’m a little scared… 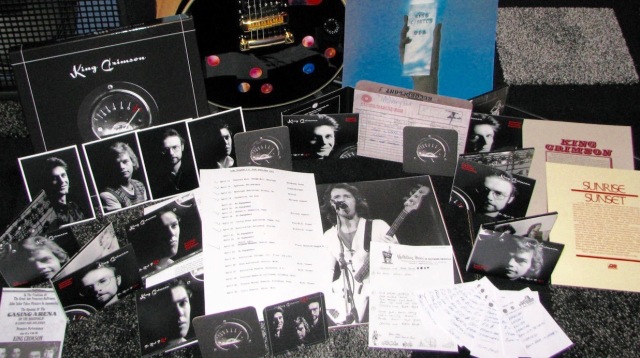 This borrowed image reveals that the VC set contains neither the coasters nor the guitar. Damn!