It seemed a fine idea to whip up a list of favourite 1977 releases; a straightforward, accessible and hopefully entertaining article.

Things started well enough, with the first post of rock-pop albums eliciting plenty of commentary as people compared their own choices to the Vinyl Connection offering.

But there was such variety in the VC list of 200+ albums bearing the year 1977 that before even putting fingers to keyboard for Ten from 77, I’d already compiled two further rough lists, one kind of progressive and electronic and the other a mish-mash of things that didn’t fit either of the other two groups. But as I listened, the lists kept shifting and as I read your comments I re-listened to other things, eventually reaching such a point of list-confusion that the old cranium was rotating far faster than its accustomed 33 ⅓ RPM.

Yet as the song says, when the going gets tough, the tough have a good lie on the couch listening to Tangerine Dream.

Here, then, is the next 1977 instalment, Part 1 of my ten favourite electronic albums of that year. Rest assured, there is no bottom-of-the-barrel scraping here. The period from 1974—1979 was a golden one for synthesiser music and seven+seven is a great example of the richness on offer…

The first post-Gong solo album from keyboard player Tim Blake, this is a fascinating—if uneven—LP. From spacey electronic music (‘Midnight’) via keyboard-driven grooves (‘Metro logic’) to the spare jauntiness of ‘Last ride of the boogie child’ (complete with unconvincing vocals), this combination of studio and live recordings has a charm that will beguile fans of analogue synth music but might be an acquired taste for newcomers. Centrepiece ‘Synthese intemporel’ is pure Klaus Schulze (in a very good way). Soon after this release, Blake joined Hawkwind, with whom he played on and off for years.

Whenever I see this first Ashra album (or final Ash Ra Temple album, if you prefer) listed in New Age discographies, I get a bit irritated. Perhaps because I’ve been following Manual Göttsching’s musical career since the mid-70s, I saw him as progressive/electronic or even Krautrock psychedelia. The New Age label—so eighties, I sniffed—seemed somehow demeaning in its implication of featureless massage muzak. Then, years later, I realised there was a defensible reason for this appropriation of Ashra’s delicate electronica: the title of the record. And also, the music. It’s drifty and more gently rhythmic than most of Göttsching’s work; kind of new age-ey in fact. Ah well. 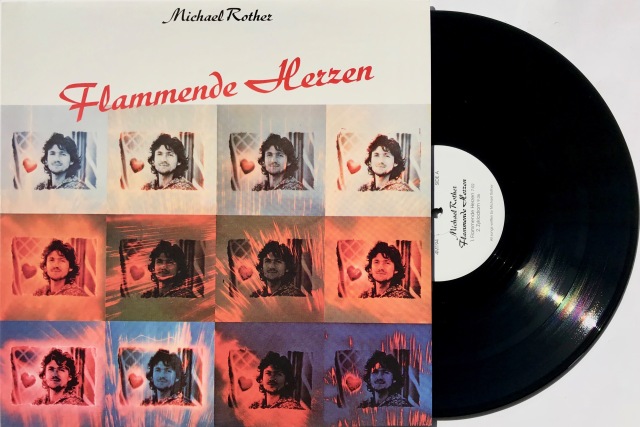 Lots of elegant guitar on this first solo release from the co-founder of Neu! In his former band, Rother was responsible for much of the melody while ur-punk Klaus Dinger added the gravel and punch. That division is reflected in this record, which is steeped in a European romanticism speaking more of rivers than autobahns. But though often pretty, it’s not all languid. Jaki Liebezeit of Can provides the quintessential krautrock motorik beat while Rother does the rest. ‘Karussell’ could have been on Neu!75—superb. At a touch over 34 minutes, it feels too brief, yet remains a very satisfying instrumental record. (The CD re-issue adds a couple of inessential remixes).

Although there are but four side-long tracks, each comprises several discrete parts. Live, the classic Froese/Franke/Baumann line-up of Tangerine Dream passed the initiative deftly between their multitude of keyboards as they spontaneously created unfolding musical landscapes and then explored them. Having said that, there are some sections referencing album pieces while others joyously bring together their combined creativity into a shifting, swirling whole. Some piano softens ‘Monolight’ while Froese’s psychedelic guitar provides adds a welcome charge to ‘Coldwater canyon’. Perhaps falling slightly short of greatness, this excellent recording—made during the US tour of 1977—nevertheless offers a fine introduction to the Virgin era of a seminal electronic outfit.

Fourteen years before Enigma, ever curious musician/composer Eberhard Schoener was exploring the possibilities of melding electronic beats with liturgically (and ethnically) derived vocal themes. But Schoener, never willing to sit with one idea when he can throw in a handful, also covers ambient electronica and analogue space drift in this cohesive 1977 album. The composer plays moog, organ, piano and mellotron while the tasty guitar cutting through the keys is courtesy of Andy Summers (Police). Transporting and most satisfying. 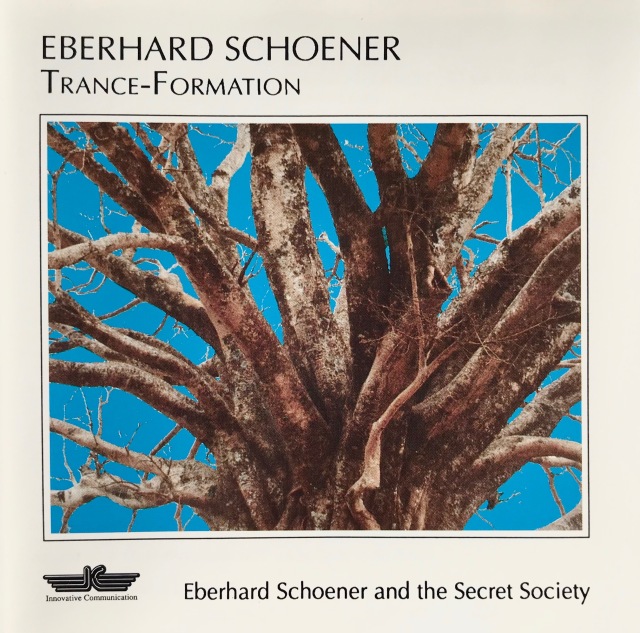 The IC CD release of Trance-Formation. Guess they didn’t like Eberhard’s pixilated face.

Numbers 5 to 1 coming soon. Not to mention the other, other list. Wanders off to the turntable, muttering…