Although The Beatles have disbanded, no-one is lazing about. Surprisingly, Ringo’s was the first solo LP in the shops, followed by Paul, Ringo again, George, then John (with Yoko) in December. It is the quiet Beatle we are celebrating here. 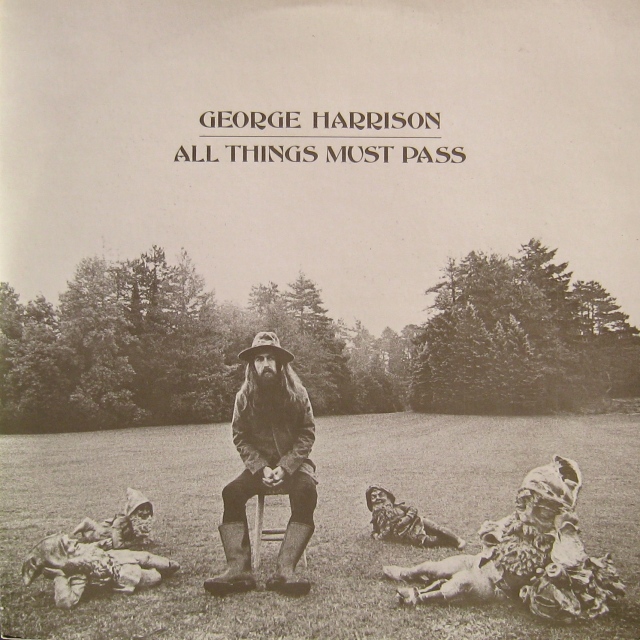 All Things Must Pass, a three record set, came out the day before my fifteenth birthday. Not that I had any idea, of course. Pop music, aka “that dreadful racket” was banned our house, meaning what little I knew of the hits of the day was courtesy of a small transistor radio and visits to the house of my childhood pal Greg who lived over the back fence*. But I had heard “My Sweet Lord”, which was all over AM radio, and could hum along to that pretty (borrowed) tune given half a chance. It even figured in a short tale of unrequited teenage love.

The parent album had a downbeat sepia cover, showing George sitting in his garden, surrounded by four reclining garden gnomes. Wonder who they represent? In Australia it came in a three-panel gatefold sleeve with the lyrics printed inside. We were not, it seems, worthy of the impressive boxed version. Our release did, however, include the poster. A dark  3’ x 2’ portrait of a morose, hairy George. But our flimsy fold-out was underwhelming. The box had solidity, gravitas. Ours was a triple album passing itself off as a double. This actually wasn’t far from the truth as All Things Must Pass was two records jam-packed with songs and a third packed with jams. 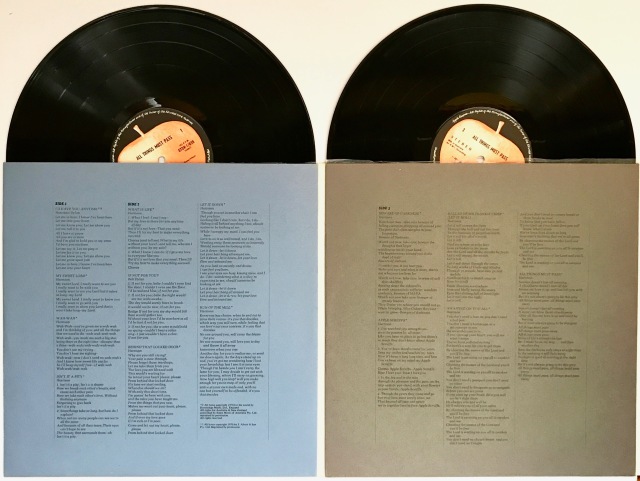 George’s frustration with the challenge of getting his songs onto Beatle albums is well documented. This resulted in the backlog of music that cascaded onto All Things Must Pass, filling four sides with such variety and quality that picking highlights is a challenge. The singles were, as mentioned, the dreamily spiritual “My Sweet Lord” and later the invigorating “What is Life”, but there is much more to savour.

…A plaintive plea for heart-opening in “Behind That Locked Door”

…Joy and rapture in “Awaiting on you All”

…Reflections on life’s journey in “Art of Dying”

…The riffing, wall-of-sound anger of “Wah-Wah” 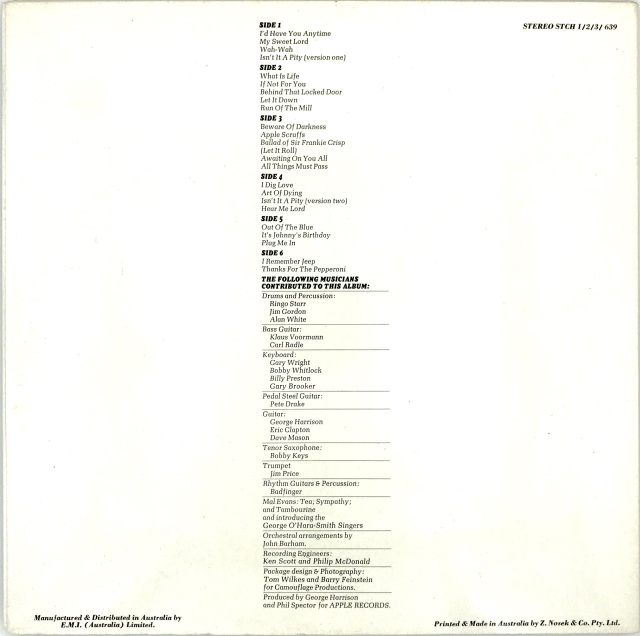 What keeps All Things Must Pass fresh is the eternal nature of pilgrimage. Of searching, of wandering, of the confusing, unexpected contradictions of human existence. “Wah-Wah”, for instance, may have been George’s raised finger to the band he’d just left, but the noise of wah-wah surrounds us daily as politicians lie, television debases, and we walk around with the endless depths of human vacuity boxed up in the little computer in our back pocket.

Similarly, the very next song may be about a dying relationship as George laments,

How we break each other’s hearts

And cause each other pain

But, as with so many Harrisongs, it applies equally to wider humanity. The “we” is also the species, how we relate to each other and the planet… “Forgetting to give back, isn’t it a pity?”

“Beware of darkness” warns about despair, inside and out. Beware of greedy leaders devoid of light, watch out for creeping hopelessness in midnight thoughts. (One of my favourites, that one). Yet we are not powerless, “Run of the mill” reminds us how we make our own reality; everyone has a choice “when to and not to raise their voice”.

Don’t for a moment think it’s all dour and grim. Few songs burst with love and open-hearted gladness as richly as “What is life”, while following this ripper is Dylan’s sweet “If not for you”. Sublime. Even the throwaway “Apple Scruffs”, a tribute to the young female fans who occupied the front steps of Abbey Road, carries a message that affirms life (and who but George would include this on an album?).

These are some of the reasons why I find All Things Must Pass such a satisfying listen fifty years on. It’s almost like I’ve grown into some of these songs—especially the more existential ones such as “Art of dying”—and expect this to continue until that last song gets played at my final gig. 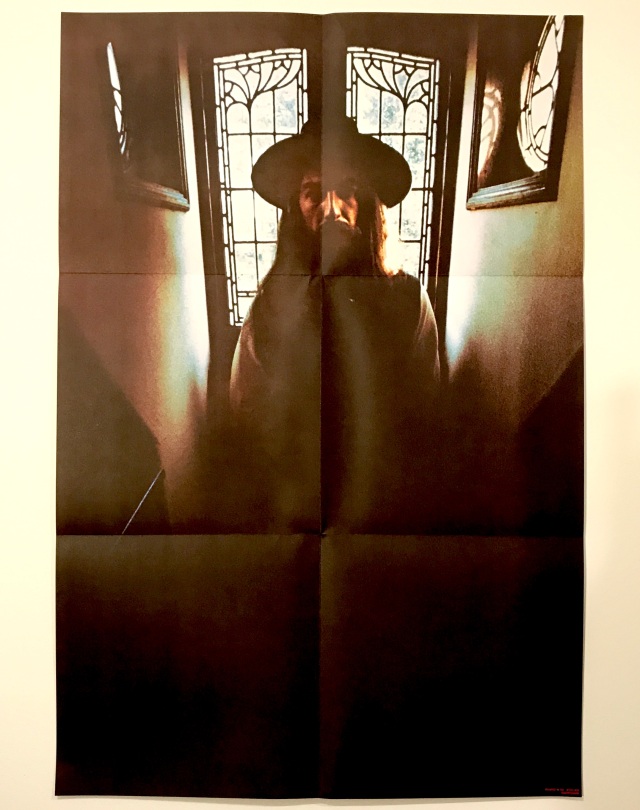 Now, All Things Must Pass is a three record set and so far we’ve only mentioned two discs. The final LP is called Apple Jam and is distinguished from the well-produced song-sides by having a different label: a jar of, um, apple jam. The contents are different too, being exactly what the label suggests… a compote of instrumental jams that many listeners only played when friends came around with cheap port and herbs. Although there is some uncertainty around who played on which tracks, it is known that three of the four the jams included Eric Clapton (who played on the album proper as well), Bobby Whitlock, Jim Gordon, Carl Radle and Bobby Keys. All but the last of these were in the process of forming Derek and the Dominos. 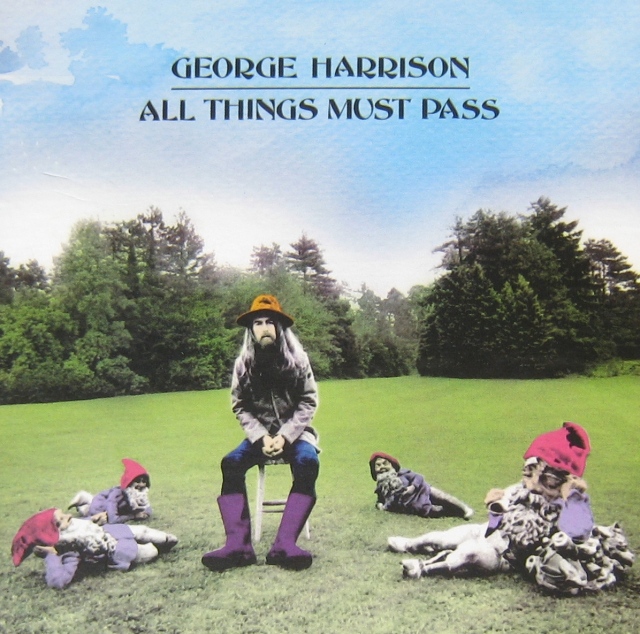 When the album was re-released on CD in March 2001, the original sepia cover photograph was colourised. I huffed and puffed at this sacrilege… until I opened the package. Reflecting Harrison’s environmental awareness, the CD sleeves and booklet told a sardonic story of urban decay. 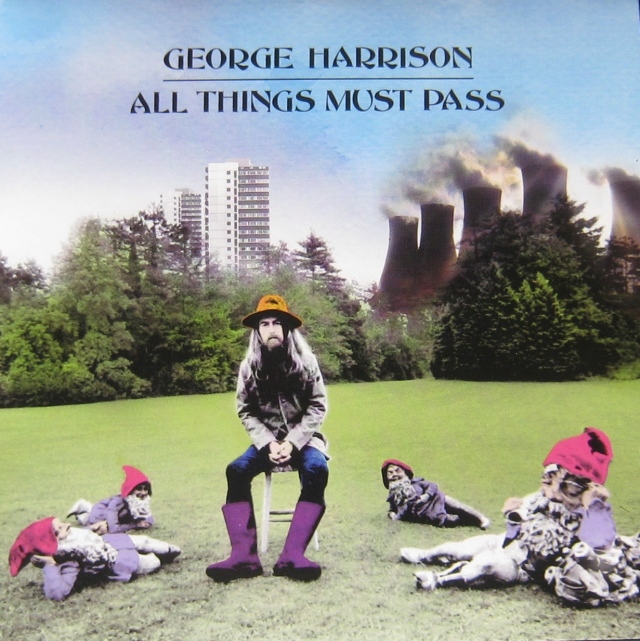 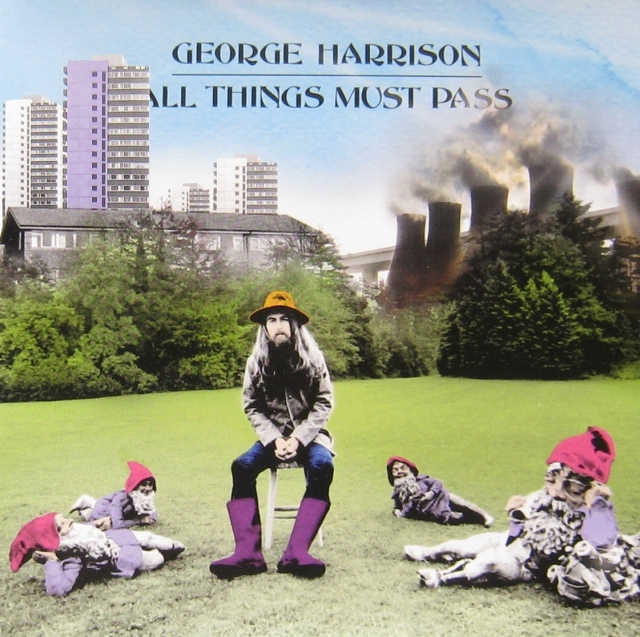 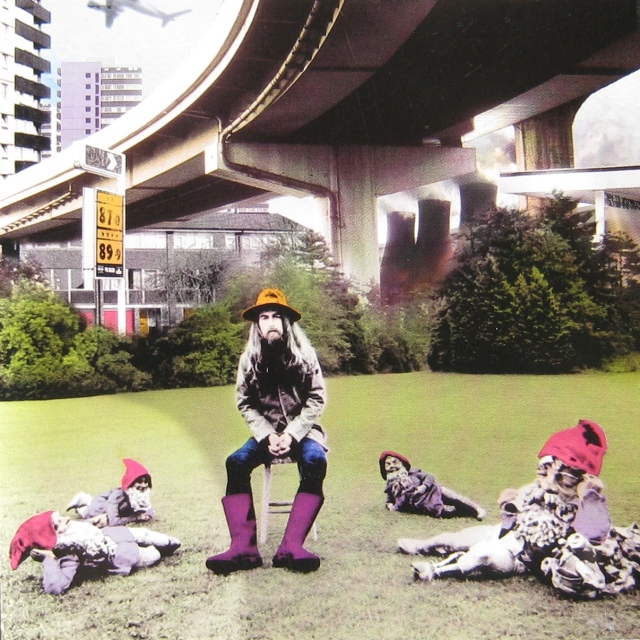 If you have followed this 70 FROM ’70 series, you’ll know that the word “sprawling” has cropped up every time a double album has appeared. But not this time. Sure, there are a couple of lesser songs, but generally the whole thing works, even the jams. It deserves the appellation magnum opus and warrants its position as the #1 album of 1970.

Of course, you may disagree.

4. Sections of this post were recycled from previous Vinyl Connection pieces and from the Discrepancy Records article, which can be found here.