My friend over the back fence invited me to come and hear his latest LP. Greg was two days older than me and we’d been playmates since our Mums met on the maternity ward. But in terms of musical sophistication, Greg was years, worlds, away from me. Not in terms of understanding how music worked; having learned the piano for years I could follow the construction of ‘classical’ music just like piecing together objects from the Meccano set under my bed. But in our house, popular music was simply excluded.

Greg’s parents not only tolerated his bringing ‘dreadful noise’ into the home, they even paid for the records. It was a bizarre and unreal indulgence and, due to my almost complete ignorance of what was current, rather intimidating… but I went anyway.

How different from tinny snatches of tunes captured from passing transistors like smells drifting from strangers’ kitchens; this time I would actually hear an album on a real stereo. Well, his parents radiogram anyway. Although it was much the same as the polished veneer box in our lounge room the vital difference was that while ours only played Gilbert and Sullivan, theirs embraced the exotic sounds of Creedence Clearwater Revival, Jimi Hendrix and of course The Beatles.

So over the fence I clambered, said ‘Hello’ to his Mum at the back door and headed for their lounge room. Greg was waiting impatiently. “You’ve gotta hear this,” he gasped, “a TEN MINUTE DRUM SOLO”. Even in my profound state of rock ignorance I felt my heart sink slightly. But putting on a brave face I dropped to the carpet as he dropped the stylus onto the vinyl.

No percussive assault streamed out of the cabinet but a wonderfully melancholic voice singing with a soul-stretching longing that somehow bathed me in light and simultaneously broke my heart … ‘Waiting in our boats to set sail… The sea of joy’. Straining for the high notes like a hand reaching for a soaring seagull; the hessian tones of a violin providing a surprisingly reflective interlude before the riff returned with rolling tidal toms and the song faded over the horizon much too soon. 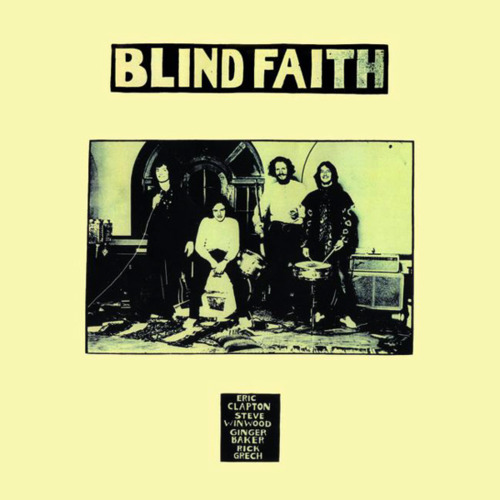 Later, much later, I learned that what transported me that Thursday afternoon was the opening song on side two of a flawed yet sometimes sublime album simply called Blind Faith. That this first ‘supergroup’ consisted of Eric Clapton, Steve Winwood, Ginger Baker and Rick Grech, all of whom had colourful histories even before they made this one album together. That the bass player also contributed the violin. That the cover I clutched in my hands and read thirstily while Rick then Ginger meandered through their interminable solos in ‘Do What You Like’ was not the startling one originally issued by their UK record company in August 1969 but a special ‘uncontroversial’ version for the colonies. That both versions would one day nestle next to each other in a music room cluttered with more records and compact discs than any sane person could possibly need.

Can music recorded a lifetime ago still reach out to a contemporary listener? If we reacquaint ourselves with album ‘favourites’ of yore are they inextricably linked to those times when we first heard them? Music enables us to visit or revisit, to reflect and recollect, to explore or rediscover. It is not about ‘Best’ or ‘Right’. Similarly the aim of this blog is to invite a connection with vinyl records (and music generally) and to celebrate both the music and the artefacts.

Reviews, opinions, observations, recommendations and all the usual paraphernalia of music-writing are present, if not correct. Yet most often we return to orbit around Planet Vinyl. If you have found yourself wondering whether there is more to music than mp3 files and shards of songs on mobile phones, then welcome.

If you can make the space, try sitting for a side or two of vinyl. Maybe with a friend. Listen, look, read, breathe. As Stephen Fry wrote, “Music is social”. If face-to-face does not eventuate, use the ‘Comments’ section. I enjoy hearing other voices.

There are connections between the people who treasure records and music. If this place helps thicken those connections, that would be great. Ultimately, connection is all we’ve got. And that last statement I guess you would call not so much a belief, as blind faith.