When 461 Ocean Boulevard was released in July 1974, it is extraordinary to note that Eric Clapton, at twenty-nine years of age, was a veteran of The Yardbirds, John Mayall’s Bluesbreakers, Cream, Blind Faith, and Derek and the Dominos. Not to mention two solo albums. Under 30 with more than fifteen album credits. Not bad, eh?

These statistics are even more striking when you realise this album, recorded at the villa shown on the cover in balmy Florida, was his return to public visibility after a number of years battling a heroin addiction.

The album is packed with accessible, concise songs, many of which have blues roots but don’t sound even remotely 12 bar to the casual listener. With the genial cover of Bob Marley’s “I shot the sheriff” providing a hugely successful single, 461 Ocean Boulevard was a quintessential mid-70s FM radio album and the most successful of that decade for the British guitarist. In fact, it’s fair to say that Clapton never really duplicated the sound (or popularity) of his second solo studio album.

Now what about the songs? Well, most of them are, by Clapton’s own admission, “cover versions… which had been rolling around my head for a long time.” * 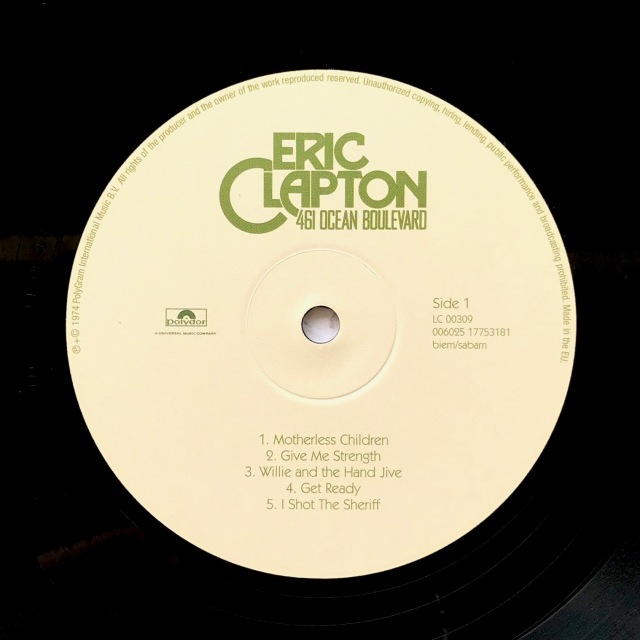 “Motherless Children” provides a propulsive opening for the album, Clapton’s guitar to the fore in the introduction before the rhythm section kicks in and the verses start. The rolling, train-like drum pattern keeps things moving but tends to iron out the pathos of the blues classic. For those unfamiliar with it, I recommend listening to Blind Willie McTell’s version (here).

“Give me strength” is a prayer. A lovely ballad with a lost, vulnerable vocal that is one of Clapton’s finest. Even confirmed ignostics can be moved by this one. There’s contrast, tho’ nothing jarring, in the restrained funky shuffle of “Willie and the hand jive”. It’s OK, if a bit uninspired.

In his autobiography, Clapton says that “Get ready” was written “for what was happening, and the way I felt about Yvonne”. Who was Yvonne and what, exactly was happening? I’ll let Eric tell you.

“One of the extra musicians who (Robert) Stigwood (RSO label boss) had brought in to join us was Yvonne Elliman, a brilliant young singer who had played the part of Mary Magdalene both on Broadway and in the movie of Jesus Christ Superstar. Of Irish and Hawaiian descent, she was incredibly pretty and exotic-looking, with long dark hair, and Stiggy was very keen that we should collaborate” [p. 162].

You can well believe they collaborated their socks off.

Closing side one is “I shot the sheriff”. When George Terry presented the Bob Marley and the Wailers recording, Eric was not keen. Even as recording wrapped up Clapton wanted to drop the song from the LP, believing it simply wasn’t up to scratch. I’m with Eric; didn’t like it then, still don’t. Though I do enjoy Dick Sims’ organ.

An Elmore Jones tune, “I can’t hold out”, opens the second side. It’s played with a jazzy feel and has a lovely understated Clapton solo. “Please be with me” is a different cover version, borrowed from southern rock band Cowboy and written by Scott Boyer. It’s a hot-afternoon-on-the-front-porch kind of song, a pretty ballad to be sung to any exotic raven-haired paramour in the vicinity.

“Let it grow” is a Clapton original, and a strong one. Although the vocal is restrained (think an English JJ Cale), the arrangement is carefully worked out with plenty of space and detail. The fact that it bears a strong resemblance to “Stairway to heaven” detracts little from this 461 highlight.

Clapton returns to the source for a competent, gently rockin’ cover of Robert Johnson’s “Steady rollin’ man” before the album closes with George Terry’s big production number, “Mainline Florida”, which is a bookend for “Motherless children”.

461 Ocean Boulevard “was recorded in a month” and released in July 1974. Clapton did tour the record (more on that later) but going out live was not his immediate plan. What, you ask, did Eric do?

“I returned to England, where I decided to make another move towards Pattie (Harrison). I knew through go-betweens that things were bad between her and George and that they are living in virtual open warfare at Friar Park, with him flying the ‘OM’ flag at one end of the house and her flying a Jolly Roger at the other”. [p.165]

Having a hit single made touring mandatory, so despite Clapton having been out of circulation for quite some time while migrating from heroin to alcohol addiction, Stigwood organised a large-scale tour of North America opening on 28th June in Newhaven, Connecticut to an audience of 70,000. Having a touring band with most of the 461 recording musicians doubtless helped with both cohesion and communication.

Clapton has written candidly about how pissed he was much of the time, yet the band delivered more often than not. Evidence is available on the 2 CD ‘Deluxe Edition’ of 461 Ocean Boulevard released by Polydor in 2004**. In addition to some solid but inessential bonus tracks tacked onto the end of the album, the set includes recordings from December 1974, Live At Hammersmith Odeon, London. The last show of the tour, in fact.

Starting slowly with the Charlie Chaplin penned chestnut “Smile”, the atmosphere builds quickly to a level of intensity that shows what Clapton fans have long known: God likes playing live.

The set-list covers a reasonable slab of the guitarist’s career, including “Can’t find my way home” from the Blind Faith LP, Cream’s wonderful “Badge”, a tearing “Layla” and “Tell the truth” (Derek & The Dominos) and “Let it rain” (a personal favourite) from the 1970 solo album. There’s also the compulsory blues medley. Even “I shot the Sheriff” gains some meat in concert, thanks largely to a neat wah wah based solo from EC. 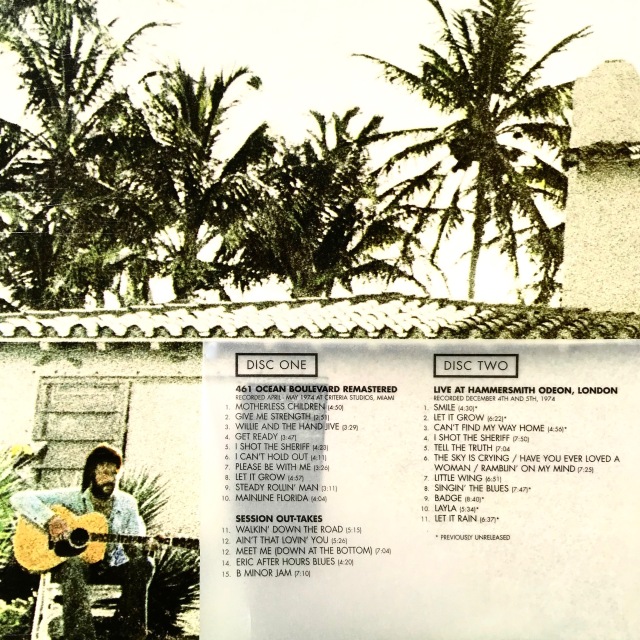 461 Ocean Boulevard is a solid mid-70s rock album. If you lived it then, as I did—wailing “plant your love and let it grow” to a mildewed bedroom ceiling—you will rekindle the feeling within moments of dropping the stylus. Coming to it later, you could be forgiven for wondering why Eric Clapton is held in such high regard. In that case, seek out the 2-CD version and play the live disc, loudly. You may not become a true believer, but his blues-infused music will definitely grow on you.

* All quotes from Eric Clapton: The Autobiography (Century, 2007)