First albums by bands are always interesting, though not necessarily essential. Sometimes the artist is feeling their way, often the vision is a work-in-progress, occasionally it’s “All Change!” after the first effort.

The two 1968 debuts we’re looking at in this post cover most of the bases mentioned above. Both are worthy of attention; both demonstrate the incorporation of influences described earlier as components of progressive music; neither would be considered compulsory acquisitions for most listeners.

Fairport Convention formed in 1967 around the singing of Ian MacDonald (later Iain Matthews) and Judy Dyble and the guitar of Richard Thompson. They went into the studio early, recording the self-titled first album in November of that year. It did not see release, however, until the middle of 1968. [That seems slow, but is super speedy compared to the US, where the album didn’t get a release until 1970, which explains, at least in part, why it is not well-known stateside].

The most obvious thing about Fairport Convention is that it has very little English folk influence. Given the deluge of Fairport albums exploring—one could say creating—British folk-rock the following year, this is surprising. In many ways, the first Fairport album is more like early Jefferson Airplane or other West Coast mildly psychedelic folk than anything traditionally English. Opener “Time will show the wiser” is a good example; almost country tinged rhythm guitar with a brief Richard Thompson solo that, even at this formative stage, shows glimpses of his unique eastern/chromatic sound.

“If (Stomp)” is twangy and almost hoedowny, while the cover of “Jack of Diamonds” comes on like a lost garage classic. A favourite track is the stomping psychedelia of “It’s alright Ma, it’s only witchcraft”. The jazzy guitar on “The Lobster” is strikingly un-Thompson, but enjoyable nevertheless. Each side closes with a brief, not especially memorable instrumental.

If this suggests a certain inconsistency, that is not an unreasonable judgement. Nonetheless, Fairport Convention is an enjoyable listening experience. The songs include a number of covers by US songwriters—Joni Mitchell, Emitt Rhodes, Bob Dylan—and some of the originals are very listenable.

When Dyble departed and Sandy Denny joined, Fairport changed direction markedly and blossomed like an English hedgerow in spring. Few would argue that inventing folk-rock is anything other than progressive (and impressive!), so next year we might well tackle Fairport’s three 1969 albums. But in the meantime, if you like US-style folk-pop-rock, don’t dismiss this debut. It may be of its time, but it was a very fine time.

Formed in Blackpool, UK in 1967, Jethro Tull recorded their first album in the middle of 1968 and released it in October of that year. In the beginning, the band was a collaboration between vocalist/flautist Ian Anderson and guitarist Mick Abrahams. Abrahams was deeply into the burgeoning blues-rock scene and hugely influenced the music of the debut (the only LP he was on). Although Jethro Tull are associated with premier league ‘Prog’, here the progressive elements are playing about with the blues form and inserting jazz tunes into the blues-rock mix. Oh, and making the flute a lead instrument.

“My Sunday feeling” leaps out of the blocks with Anderson’s distinctive voice and flute in a fast-paced rocking arrangement. Following this with an original blues straight out of the John Mayall playbook (complete with harmonica) shows how different this debut is from what followed.

The jazz influences are very obvious. “Beggar’s farm” has Anderson laying out a solo that is pure jazz while side one closes with an interpretation of a Roland Kirk piece, “Serenade to a cuckoo”, one of four instrumentals on This Was.

Highlights of the second side include opening cut “Dharma for one” featuring Anderson’s flute and an energetic (if overlong) drum solo, and fan favourite “A song for Jefferey”, both hinting at where Jethro Tull would progress next. 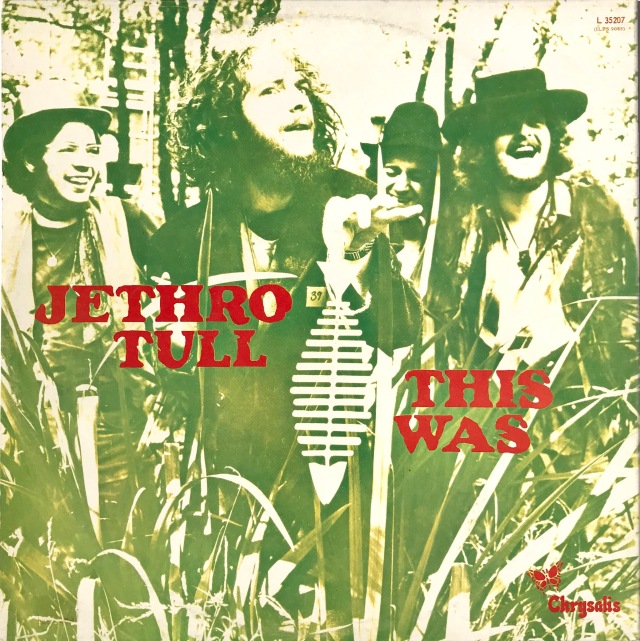 NEXT: An album that could be considered to have invented a genre while contributing to the popularising of World Music.

1968: a year that just keeps on progressing

← DADDY, WHERE DID PROG COME FROM?
SINGLES ACTION →