In an article a few months back, Vinyl Connection dipped into the massive Klaus Schulze catalogue for the first time (here). One of the reasons it took so long to write about this key electronic artist was the sheer quantity of high-class albums Herr Schulze has produced since his 1972 debut.

Fortunately, the “Dune” series gives us the opportunity to talk about not one, but two Klaus Schulze releases, the prolific musician’s final offerings of the seventies.

And who did Klaus choose as his inspirations? A philosopher (Friedrich Nietzsche), an Austrian poet (Georg Trakl), the eldest son of Johann Sebastian Bach (Friedemann Bach), a Bavarian King (Ludwig II von Bayern), another poet/writer (German Heinrich von Kleist) and—sticking out like a hamburger in a wurst factory—American science-fiction writer Frank Herbert.

In the notes accompanying the 2005 CD re-issue, Klaus Schulze expresses his admiration of Frank Herbert as someone who “influenced me very much”, going on to say that Dune “was almost a bible for me at that time” (1978). 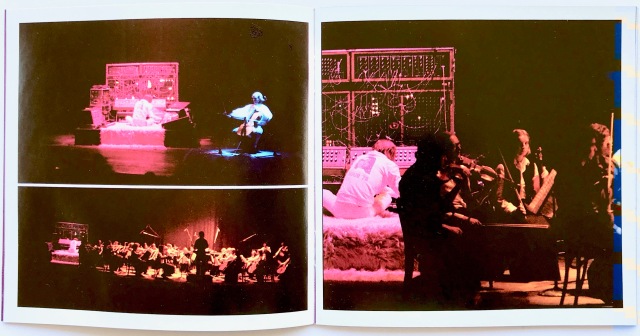 The opening side, “Friedrich Nietzsche”, opens with a trickle of synthesisers and builds steadily into a deep-flowing stream. Like so much of Schulze’s work, the rhythmic underpinning of bass and drums (Harald Großkopf) give the twenty-five minute piece a rolling momentum over which lines of melody and waves of arpeggios wander. The brief “Georg Trakl” completes side one on the vinyl version, but if this is your favourite track, be not dismayed. The CD re-issue (SPV, 2005) adds an astonishing twenty-one minutes to this five minute piece. Some coda, eh? (There is a complete live version of one of the tracks too, making the 2CD set great value).

The other three sides are between 28’ and 30’ minutes. Klaus Schulze provides outstanding value for money on his albums! Several of the pieces add actual wooden stringed instruments, which compliments the synth layers and adds an extra tonality that sometimes blends superbly and at other times rises above the electronic plains to deliver a goosebumpy human flavour (the violin contribution to the ambient electronica of “Friedemann Bach”, in particular). Also memorable is the contribution of cellist Wolfgang Tiepold, who makes “Heinrich von Kleist” a moving and memorable final side.

And what of the piece inspired by Frank Herbert inspired? It opens with a spacey swoosh before settling into a wonderful sequenced groove that might evoke the thrilling experience of riding a giant worm across the endless dunes of Arrakis. I say “might” because on my last visit to the planet, the worm-ride was closed due to violent dust storms. Still, it’s exciting music and a piece where I would not have minded an extended version.

Fortunately, more Herbert-inspired music was forthcoming in short order from the German synthesiser maestro. Dune was recorded in April/May 1979 and released later that year.

Divided into two long sides (with a bonus live ‘side’ on the CD re-issue I don’t have…curses!), it is the first piece, “Dune” that contrasts most strongly with the mood of X. On his official website, Schulze describes this half-hour composition as “experimental ambient meets masterfully played cello”.

The cellist is the same chap who graced X, Wolfgang Tiepold, and the above description is apt. I really like this variation on the rhythmic pulse so common in Klaus Schulze’s music. There’s a  mournful, abandoned-factory-at-midnight spookiness that makes the cello interplay almost spectral at times.

The second side of Dune is a much more rhythmic affair with a most unusual addition to a KS album… vocals. The inimitable Arthur Brown (recently encountered in these pages here) intones a long poem by the composer in a ten minute chunk (beginning at 8’30”) before returning for two shorter sections in the last third.

Knowing about the poem and imagining Arthur’s histrionic style was, for many years, a deterrent to acquiring Dune. Eventually I picked up the CD and decided it’s not bad at all. Brown’s delivery is restrained and skilfully rhythmic, while his voice is mixed in a way that doesn’t smash your face in. You could say it’s more monk-lite than hell-fire. The actual “Shadows of Ignorance” poem is tolerable, and with lines like “We know that we’re coming through, coming thru… Across the sand… coming thru…” one can almost believe both sides are Dune-inspired. When I found a copy of the LP in great condition I had no hesitation in snapping that up too.

Although most of the albums considered “classic” Klaus Schulze are from the mid-70s, both of these late-decade offerings are strong and enjoyable, lifted by their incorporation of acoustic touches into the synthesised waves. If I was a ratings type guy, I’d award both a solid four stars. 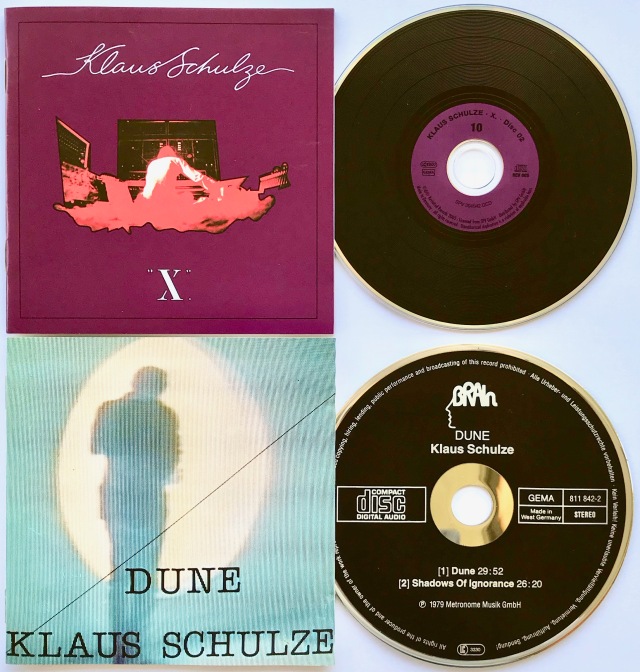 The Saga So Far

In which we discover music made for a documentary about a filmmaker’s failed attempt to adapt the book.

In which a pop band get commissioned to make a soundtrack for a brave but ultimately unsuccessful film adaptation of the book.